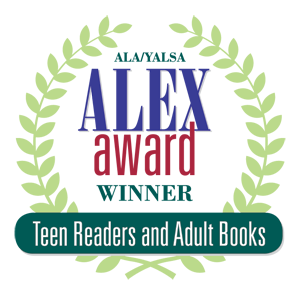 “The Alex Awards are given to ten books written for adults that have special appeal to young adults, ages 12 through 18.

The winning titles are selected from the previous year’s publishing. The Alex Awards were first given annually beginning in 1998 and became an official ALA award in 2002.

The award is sponsored by the Margaret A. Edwards Trust. Edwards pioneered young adult library services and worked for many years at the Enoch Pratt Library in Baltimore. Her work is described in her book Fair Garden and the Swarm of Beasts, and over the years she has served as an inspiration to many librarians who serve young adults. The Alex Awards are named after Edwards, who was called “Alex” by her friends”

Feeling stifled and powerless, high school friends Ray Cappicciano and Jon Mosher yearn for change and plan for freedom from their blue-collar town and dysfunctional homes, even while knowing they can never truly escape.

The Death of Bees (M)
by Lisa O’Donnell

With their parents dead and buried in the backyard, Scottish teens Marnie and Nelly are finally free from a childhood wracked with abuse. If only the neighbor’s dog would quit digging in the garden.

Max, an intersex teen, is confused about who he is and who he is meant to be. After one shattering night, he is faced with a choice that no boy should ever have to make.

Help for the Haunted (M)
by John Searles

Sylvie has been dealing with taunting classmates, her erratic older sister and the unsolved murder of her ghost-hunting parents. But perhaps more problematic are the cursed remnants of her parents’ work still lingering in the basement.

In this fast-paced, cutthroat story, words are weapons and poets are the ones who wield the swords. Teen prodigy Emily may be the finest poet ever until she makes the catastrophic mistake of falling in love.

Couch potato Roen Tan becomes host to the alien Tao who has lived millennia inside some of the most famous people in history. With Tao on board, Roen enters a war to save mankind.

Why did Rose run away? Did Violet really stab her little brother? Is her alcoholic father really having an affair? In this chilling novel about family dysfunction, does mother really know best?

Relish: my life in the kitchen (M)
by Lucy Knisley

This poignant graphic novel is a wonderful journey of cartoonist Lucy Knisley’s transition from childhood, to adolescence, to adulthood, framed by the food that shaped her worldview. Through colorful vignettes she tackles complex issues with humor and unique family recipes.

The Sea of Tranquility: a novel (M)
by Katja Millay

Nastya has barely survived a brutal attack. Josh has lost his entire family. The two isolated teens are drawn together as they deal with their emotional and physical damage.

The Universe Versus Alex Woods (M)
by Gavin Extence

It all begins when Alex is hit in the head by a meteorite and it all ends when he is arrested trying to re-enter England with several grams of marijuana, lots of cash, and the ashes of Mr. Peterson.