Global losses from natural disasters are largely related to extreme weather events, such as hurricanes.  These losses have been increasing exponentially over the past several decades.  Normalized to inflation, total losses have increased from less than $50B a year to several hundred billion.  This year, historic storms like Harvey and Irma may result in global costs approaching $1 trillion! 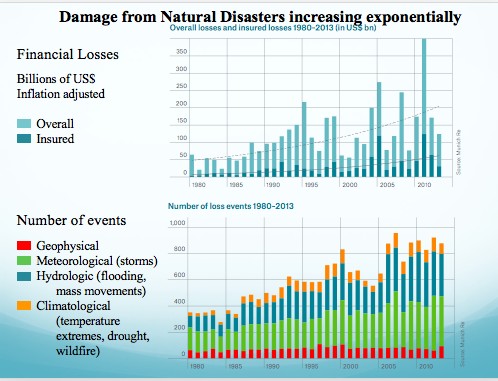 Obviously, this is not random.

1. Much of this increase is a result of our increased wealth, population, and where we live.  The graphic below shows the change in the number of homes in south Florida in the past 50 years.  Many of these properties are second properties.  As well, a large number of them are very expensive, and built near the coast that is vulnerable to storm surge flooding and strong winds.  Furthermore, our increased wealth is illustrated by the number and type of vehicles we own, as well as what we have in our garages, wharves, basements and homes.

What we own and where we locate it it is in many ways irresponsible…. and we are paying for those decisions. 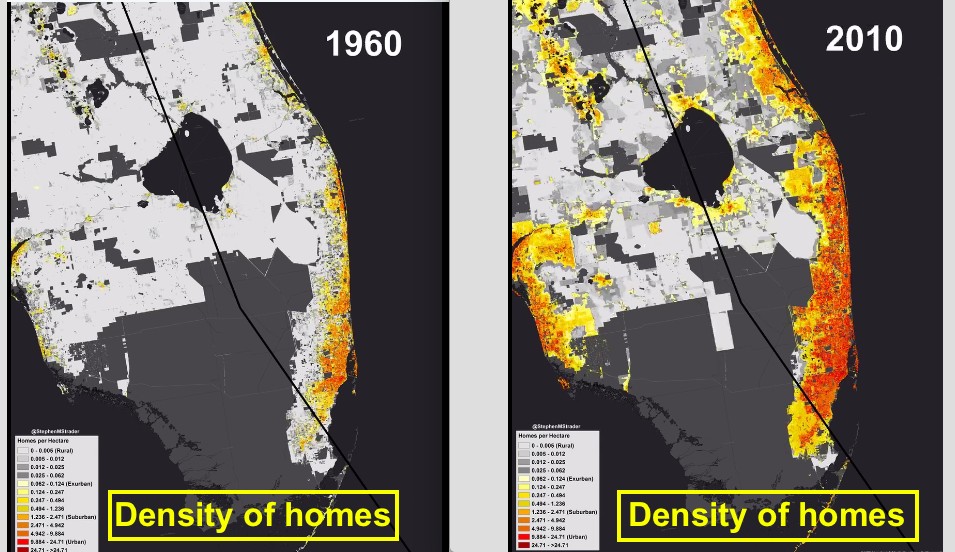 The concentration of carbon dioxide in the atmosphere has increased from 300 parts per million to over 400 parts per million over the past 50 years.  These are unprecedented levels, largely due to our increased use of energy and the burning of fossil fuels.  This energy use has benefited our economy and allowed our population to grow exponentially.  However, it has also allowed our atmosphere to warm by more than 1C, with additional warming of 1 or 2C or more before the end of the century.

2. Much of the warming has also taken place in the oceans.  Between the melting of ice caps and glaciers, and the expansion of the warmer oceans, the sea level has been rising.  This rising sea level is resulting in enhanced coastal flooding when storm surges occur.  Furthermore, since hurricanes feed off of warm water, warmer oceans provide additional fuel to hurricanes, and contribute to the intensity of storms like Harvey and Irma.

3. A warmer atmosphere is capable of holding more moisture (about 7% per 1 degree C of warming).  The consequence of this is an increase in extreme rainfalls.  These are happening, and will continue to get worse… unfortunately.  Our stormwater systems are aging, and less able to manage these heavier rainfalls.  This is another reason why freshwater floods are on the increase.

So as we maintained glued to our screens this weekend, thinking and praying for the folks struggling to protect themselves, their families, and their possessions from the devastation of Irma, we acknowledge our collective role in deciding where we build and what we own; and how that makes us more vulnerable to rising seas, heavier rains, or more powerful storms. 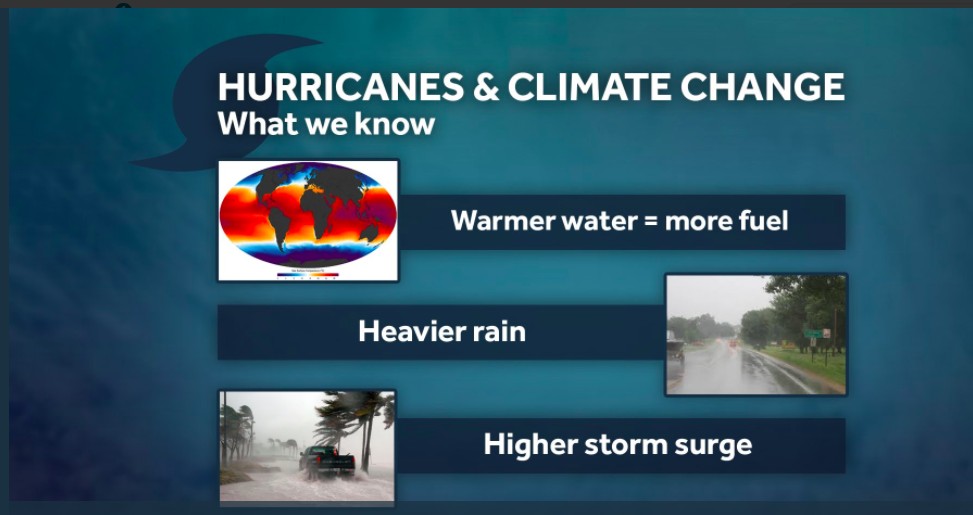