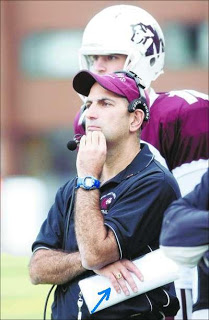 120 Days Until Calgary vs SMU
This year’s Uteck Bowl, the CIS football national semi final, will pit the Can West champions versus the AUS champions at Huskies Stadium in Halifax. The date is November 21, and in the land of Husky nation, anticipation is already building.
Saint Mary’s will be favoured to win another AUS title. After a two year hiatus a few years ago, the Huskies have reclaimed their place as the team to beat in the maritimes.
Out west, the Calgary Dinos were conference champions last season before being hammered by Laval in the Uteck Bowl played in Quebec City. A year older and wiser, the Dinos should be in a good position to win the Can West again.
If all goes as expectd (although getting through Manitoba, Alberta, and Regina is much harder than Acadia and Mount Allison), the Calgary Dinos will travel to Halifax to face the Saint Mary’s Huskies in what should be the most highly touted and anticipated Uteck Bowl in years.
Why?
Well, not because of any rivalry built on the field. Even the most diehard of Huskies faithful
would be hard pressed to recall a football game between these two teams.
This game will be discussed, analyzed, and hyped for two very significant things that happened off the football field.
First, the Head Coach of the Calgary Dinos is none other than Blake Nill. Nill was the boss of the Huskies from 1998 – 2005. During his tenure at SMU the school won 6 straight AUS championships, 4 Atlantic Bowl/Uteck Bowls, and back to back national championships, 4 AUS coach of the year awards, and a CIS coach of the year award in 1999.
Nill left the program to coach in his hometown of Calgary. The Dinos were a disaster when Nill arrived, three seasons later they were conference champions. They lost to Laval in the national semi final in a game that was close for about 2 minutes. The Dinos were young and Laval was the best team in the country, playing in their home stadium where 16000 fans dressed in red scream the entire game.
Nill expects his Dinos team to make another trip to Laval; this time in the national championship game.
Standing in the way will be the Saint Mary’s Huskies, coached by Nill’s friend and former offensive assistant at SMU, Steve Sumarah. During their years on the sidelines of Huskies stadium, Nill and Sumarah were a perfect team. Nill led the defence, while Sumarah mapped out the offence.
When Nill left for Calgary, Sumarah was named his replacement. After three seasons, Sumarah is beginning to build an impressive resume himself. Back to back AUS championships, a trip to the national championship game, and 2 AUS coach of the year awards.
The return of Blake Nill to Huskies stadium and the classic matchup of mentor vs student would be enough drama to heighten interest and sell tickets. But there is another, maybe more significant reason for a huge build up to this game.
Last January, Huskies star quarterback and former Hec Creighton trophy winner, (the award given to the best player in the country), Eric Glavic, announced he would be transferring from Saint Mary’s.
Where would he be going? 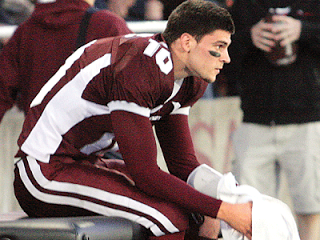 The University of Calgary.

By the time the media found out, Coach Sumarah had been told a few weeks prior by Glavic of his decision to play at Calgary. He would go west to play for the man who recruited him east just three years ago.
To his credit, Sumarah has taken the high road when broached on the subject. He says it’s disappointing but holds no grudges against Glavic or Nill, and that the team is ready to move forward.
However, Glavic’s departure has to be considered a blow to the Huskies chances of winning a national championship. Finally fully recovered from an injury that kept him out of the national championship game in 2007, and almost all of last season, Glavic will probably be most dynamic pivot in the game.
For Sumarah, a guy who loves the offensive side of the ball, the loss of a player of Glavic’s skill and creativity has to be heartbreaking.
These subplots could make for a very intriguing Uteck Bowl that should get a lot of attention across Canada.
So will we see the Huskies and Dinos on November 21st? Blake Nill and Steve Sumarrah sharing the same sideline once again, Eric Glavic scrambling around Huskies Stadium in a red Dino’s uniform.
This time tomorrow we’ll only have 119 days until we find out.