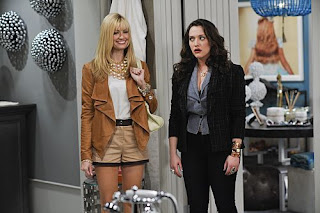 OK, 2 Broke Girls, you have one more episode to hook me – but I don’t think you’re going to do it.

I said I’d give all the new fall comedies I decided to watch at least five episodes before dumping them, and 2 Broke Girls is the only one in danger of getting the axe. Last night’s episode, the fourth so far, was definitely the most likable installment to date, but there are some things about the show that I’m just not sure it can or will fix.

Let’s start with the good:

I liked that this episode finally created something of a bond between Max and Caroline, and it finally acknowledged that Caroline hasn’t been a spoiled brat at all, she’s actually been pretty damn awesome. I mean, could you give up all the comforts you’re accustomed to, move to a crappy apartment in Brooklyn with a sour roommate and only three outfits and still maintain a Pollyanna-like disposition? Doubtful. Caroline is a bad ass, she is a trooper, and it was nice to see Max finally recognize that.

When Caroline’s wonky teeth started shifting and she realized she really needed her bite guard, she and Max broke into her swanky townhouse to get it back. Caroline wasn’t focused on retrieving any of her old luxuries, just the practical dental appliance. It was Max who was blown away by everything. As the girls hung out in Caroline’s massive closet, we learned that she grew up without a mother and was mostly raised by maids, and that she was really close with her dad. Oh, and that she and Max like some of the same music. Learning all this definitely humanized her character, and I’d like to see the same done for Max. At the very least, Max was softened in this episode, and that was helpful.

Watching Max and Caroline stealing everything expensive they could from the apartment in hopes of selling it, and having to wear it all on the subway home? That was funny. Do more stuff like that please, showrunners. Or like these actually funny moments:

And now let’s talk about the bad:

Where the show continues to go off the rails for me is at the diner. The supporting characters are racial stereotypes and nothing more – and what’s worse is that they’re not funny. Really, really not funny. I mean, can you get anymore cliche than the Asian diner owner installing karaoke? Where was the joke there?

Furthermore, I’m growing incredibly weary with the way this show seems to think ending a sentence with “…bitch!” makes it a punchline. It doesn’t.

If 2 Broke Girls could focus more on the friendship between Max and Caroline, with moments like the two girls dancing and eating sushi, I could possibly keep watching this show – it is, after all, on after a show I watch and there’s nothing else on for me on Monday nights. But if the show doesn’t fix some of the bigger problems with the supporting cast, I’ll have no choice but to follow up How I Met Your Mother by watching DVDs or, like, conversing with real humans or something.