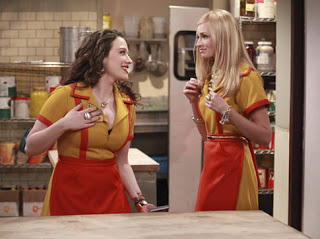 I feel like every review of a new show (especially a sitcom) I write should begin with a disclaimer. So here it is:

This is just the pilot, you guys! Give a show a chance to find its groove, hire a writing staff and develop around its talent! Think of all the hilarious shows that sucked at first!

That said, when I watched 2 Broke Girls last night I saw serious potential and a few negatives.

2 Broke Girls stars Kat Dennings and Beth Behrs as two waitresses who work at a skeezy Brooklyn diner. Dennings plays Max, a tough, sarcastic working class girl who works two jobs and lives in a crappy nearby apartment. It’s a perfect role for her. Behrs plays Caroline, a formerly wealthy Manhattan socialite who loses everything thanks to her dad’s Bernie-Madoff-like Ponzi scheme. I was worried that Behrs’ character would what kept me from liking the show, but Caroline surprised me. While she certainly had some typical rich girl attributes, she didn’t play into every stereotype. She’s a hard worker, is smart, and despite being spoiled is generally a good person. She also has a sharp enough sense of humor that you can see how a friendship between the two waitresses will develop. This, I think, is the strength of the series.

The show also made me laugh enough to want to see more. There was a joke in the cold open about hipsters and knit hats that I liked, as well as a few other one-liners from both Max and Caroline. It’s the other characters that need to be flushed out, like the diner owner and the incredibly stereotypical rich socialite new mom who Max works for, as a nanny to her twins…named Brad and Angelina.

One of the other downfalls is the traditional multi-camera, taped in front of a live audience with an obnoxious laugh track format. Now, I like several shows with laugh tracks. I don’t even notice it on many of them. But since this was a pilot and 2 Broke Girls isn’t unbelievably funny (at least yet, I’ll give them time to grow), the laugh track was painfully obvious.

At the end of the episode, the Wharton educated Caroline moves in with Max and suggests a plan to work together to open a bakery, using Caroline’s business savvy and Max’s baking skills. This is the show I’m interested in, and I thought the running tally of how much money they’ve saved at the end of the episode was a cute touch. All in all, I was happy with 2 Broke Girls and look forward to seeing what they do after they have a few episodes under their belts.