The 2009 Governor General’s Literary Awards have been selected.

Here are the French language winners (with descriptions from the GG website): 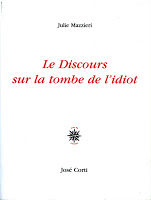 Fiction: Le Discours sur la Tombe de l’Idiot, by Julie Mazzieri
An exceptionally polished novel, the result of an exemplary mastery of narrative. The text is deep, dark and implacable, and the tight, suspenseful writing stays with us long after the book is finished. The author sets herself the challenge of making the story believable, and she has succeeded brilliantly.

Poetry: Thérèse pour Joie et Orchestre, by Hélène Monette
In Thérèse pour joie et orchestre, the poet transforms the sister she lost to illness into a happy spirit floating over people and places. This elegy orchestrated by Hélène Monette is astonishing in its ability to touch the reader. A magnificent ode in a voice that is generous and powerful.

Non-Fiction: Pointe Maligne : l’infiniment oubliée, by Nicole V. Champeau
Like a requiem, this book sings of the destruction of the territories of the Upper Saint Lawrence, drowned by dams and depopulated by expropriation. These places have even disappeared from the memories of maps. Around Cornwall, originally called Pointe Maligne, the memory of the founding peoples, Amerindian and French, has been obliterated.

Drama: Le Bruit des os qui Craquent, by Suzanne Lebeau
Le bruit des os qui craquent is a rare, courageous and beautiful work. Suzanne Lebeau conveys the devastating effects of war on children with sensitivity and uncompromising rigour. Directly and with heartbreaking lucidity, she broaches the question of individual and collective responsibility, and proposes empathy as the road toward hope and ultimately, redemption.

Translation: Le Miel d’Harar, by Paule Noyart
(French translation of Sweetness in the Belly by Camilla Gibb)
Paule Noyart shows a keen sensitivity to the poetry of the original. In a true act of literary creation, the expressive liberties the translator has taken serve this culturally-rich novel well. The remarkable quality of her work manages to transcend the limits of the translator’s art – a rare accomplishment indeed. 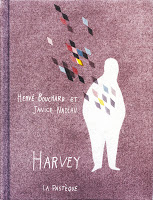 Children’s Literature – Text: Harvey, by Hervé Bouchard
Hervé Bouchard makes us feel the confusion and helplessness of a little boy faced with the death of his father. His surprising and extremely sensitive writing is deeply moving. Through a series of poetically powerful metaphors, he allows us the freedom to explore the multiple layers of his story.
Children’s Literature – Illustration: Harvey, illustration by Janice Nadeau
In illustrating a book that stands out for the originality of its language, Janice Nadeau has come up with wonderful ways of depicting the sadness of spring and the melancholy of loss. The subtle drawings dance with the text and give rhythm to the reading. Hervé Bouchard’s Quebec comes alive under the brush strokes of the illustrator.