Well, it’s all over but the crying. No, seriously – I only correctly predicted three Emmy categories and Allison only got four. Almost all the Emmy Predictions Contest participants beat us. Tears will be shed.

But speaking of the Couchtime Emmy Predictions Contest, congratulations to Rob and Reed, who tied for first place with seven correct answers! The super cool thing is that Rob and Reed are married (and their answers weren’t even the same!) so that is one household that’s very knowledgeable in good TV. Thanks to everyone who participated, it was really fun to do the contest for a second year. Many of you had six correct answers, which is a lot more than I can say for myself.

Even though I kind of bombed my predictions, I was kind of happy about that – it meant that a lot of the categories were surprises, and a few went to people I was really rooting for. (Friday Night Lights!) So, let’s talk about the broadcast (I might be brief since I’m recovering from wrist surgery and can’t type very well or fast) and later today I’ll have another post up devoted to Emmy Awards red carpet fashion.

The show was hosted by Jane Lynch, and I thought she did a very good job. I didn’t fall off the couch laughing, but there were enough funny bits to keep the show entertaining. I really enjoyed the opening video segment. Jane Lynch didn’t take herself too seriously, the song was clever and I loved seeing her walk through all my favorite shows. The best parts were definitely the Glee/Friday Night Lights mash-up and her interaction with the folks from Mad Men.

I also loved the video they made that mixed all the workplace shows together. I mean, it doesn’t get any better than Amy Poehler impersonating Khal Drogo or Aaron Paul from Breaking Bad dropping off crystal meth to Creed. The SNL performance with Michael Bolton was also good for a few laughs.

One thing that didn’t quite work was The Emmytones. I tolerated it only because the people involved were so charming, but I wish their songs had been wittier.

The awards were broken down by category again this year, which I hate because it makes for a really boring Miniseries and Movies segment in the middle. But we began with Comedies, which delivered some great moments.

First, Julie Bowen won Supporting Actress in a Comedy for Modern Family. I was really surprised this didn’t go to Sofia Vergara, who I think deserved it, but I love Modern Family (and, Ed!) and was happy for Julie.

Next was Supporting Actor on Modern Family – oops, I mean in a Comedy, and that went to Ty Burrell of – you guessed it! – Modern Family. I had predicted and was rooting for Ed O’Neill here, but Ty Burrell, and all the men of Modern Family, are really great. Good job, Dunphy family!

Now, can we talk about how ridiculous it was that Charlie Sheen was given yet another opportunity to address the world? And just because he’s off the coke and back on mood stabilizers (just a joke, not a known fact, please don’t sue me) doesn’t mean I buy a word he said about Two and a Half Men. He announced Lead Actor in a Comedy, which went to Jim Parsons for The Big Bang Theory. I love Jim Parsons and think he’s fantastic on that show, but I still really, really think Steve Carell deserved it for the great work he did on his final season of The Office. Plus, it’s a crime that he never won for playing Michael Scott.

My favorite moment of the night came when it was time to announce Lead Actress in a Comedy and all the nominated women got up on stage, like it was a beauty pageant. At first I though Amy Poehler was just joking around, but having them all up there was just brilliant.

And when Melissa McCarthy won for Mike and Molly, they gave her flowers and a tiara! So great. Now, I was really rooting for Amy Poehler and Tweet this when they announced the winner: 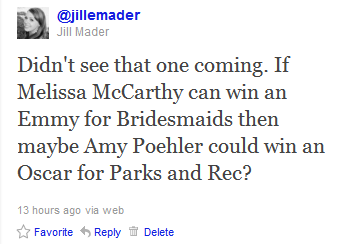 Congratulations to those of you who understood that I was joking – I only meant that Melissa McCarthy’s hilarious performance in Bridesmaids and all the positive buzz about her certainly didn’t hurt her chances. But I really do like her as an actress (I mean, she was Lorelai’s best friend, for goodness sakes!) and was happy she won. And as one Twitter pal pointed out, seeing a woman from an actual comedy win is definitely something to celebrate.

Next, I got two more predictions wrong – The Amazing Race won for Reality Competition Series and The Daily Show With John Stewart won for Variety, Music or Comedy Series. I was happy for The Amazing Race since I love that show, but I was really rooting for Jimmy Fallon this year. I’ve started recording his show at night and I just think it’s so fun and charming and funny. Speaking of late night TV though, did anyone catch how Conan kept pretending to be asleep during the show?

Now, I didn’t record the winners for any of the categories that weren’t part of the contest, but can we talk about how excited we all are that Jason Katims won for writing Friday Night Lights??? SO EXCITED. “The Suitcase” was a damn good episode of Mad Men, but I am so over the moon that Katims was recognized for his outstanding work on that show.

Next Margo Martindale won Supporting Actress in a Drama for Justified and Peter Dinklage won Supporting Actor in a Drama for Game of Thrones. These were two of the measly three categories I got right. I don’t watch Justified but I’d heard so much about Margo Martindale that I took a chance and picked her. People on Twitter seemed really happy about that award. And Peter Dinklage was easily one of the best parts about Game of Thrones this year, so I was pleased with that choice.

Next, Julianna Margulies won Lead Actress in a Drama for The Good Wife. I went back and forth on this category because I know how popular that show is, but I really thought Elisabeth Moss deserved it for “The Suitcase” episode and Mad Men as a whole, and I really thought Connie Britton deserved it as well. Since I don’t watch The Good Wife (yet, anyway) I have to say, I was kind of disappointed.

BUT THEN! Oh, but then. Then Kyle Chandler won Lead Actor in a Drama for Friday Night Lights. I was so happy! So, so happy! And a bit torn, because this also felt like Jon Hamm’s one, Cranston-less chance to win, and he is also very deserving. But this was Kyle Chandler’s absolute last chance ans Coach Taylor is so fantastic, and, and, CLEAR EYES FULL HEARTS CAN’T LOSE, y’all! OK, I’ll stop type-screaming now.

The Miniseries/Movie segment felt like it dragged on and on, mostly because I only included Best Miniseries/Movie in the contest. I was happy Kate Winslet won, though. She seemed so genuinely thrilled, and now she’s only one small Broadway role away from an EGOT.

Best Miniseries/Movie went to Downton Abbey, which many people seem to like. Finally, Drama Series went to Mad Men and Comedy Series went to Modern Family. Neither of these were huge surprises. While I did think Outstanding Drama was anyone’s to win (even FNL, after that Chandler win), Mad Men has won it every year and the most recent season was another lesson in how to make great TV. And had anyone other than Modern Family won after all those nominations and wins, it would have just been bizarre. I know a lot of people feel that Modern Family didn’t deserve quite so much recognition, and I do personally prefer Parks and Recreation, but I do love the show and am glad to see a traditional comedy (read: not a half hour Showtime dramedy or Glee) get some Emmy love.

So, did you watch the Emmys? What did you think?