Writer and actor Andy Jones has been awarded the 2012 BMO Winterset Award for his book Jack and Mary in the Land of Thieves. (M) 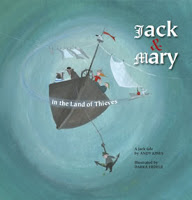 In Jack and Mary in the Land of Thieves “Award-winning storyteller Andy Jones and acclaimed illustrator Darka Erdelji are back with another whimsical, wise, and witty ‘Jack tale’ — the third in their on-going series. Jack and Mary in the Land of Thieves finds Jack, that everyman of folktales, married to his sweetheart Mary, the best woman ever born and a mighty fine baker to boot. Their lives are as happy and successful as can be, until an underhanded sea captain and Jack’s own bragging get the better of our hero. Jack is sent to work on Slave Islands, and Mary is turned out of house and home. But Mary is resolute and resourceful, and has plans to find Jack and restore their fortunes. With a hidden key, a storm at sea, and a singing mynah bird named Baxter who carries more than his share of tunes, Jack and Mary in the Land of Thieves will delight youngsters and oldsters alike.” publisher
This year’s finalists included Don’t Tell the Newfoundlanders (M) by Greg Malone and Russell Wangersky’s Whirl Away. (M)