2013 was a good year. we had the most readers yet, and set records for page views in a month and a single day.

In Incidents – the year began in an eventful manor.

January brought the tow issues with HMCS Athabaskan. The Tug Craig Trans was abandoned in Halifax,  The Lubov Orlova also broke her tow, and is presumed sunk.

At Halifax Shipyard, The Hero Class program continued, with launched. the FELEX refits continued, and the AOPS Design Contracts were signed. the Joint Support Ship design was chosen and the ships named. The Expansion Also continued, with new piers, and Parking grarage, and the removal of older assembly buildings.
several vessels being 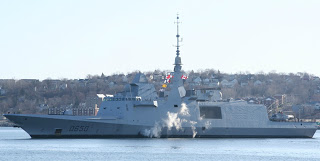 April brought the french warship FS Aquitaine. the year was light in ship visits, with a few USCGnorthland, Seneca, Morrow Bay, and Eagle) Visits early in the year. The german Navy research vessel FGS Planet visited, as did the JMSDF training Squadron, and Royal Navy Survey Vessel HMS Scott. the sole US Navy visitor was USS Nicholas, likely due to the American Budget situation

New Cranes Arrived at Halterm in August. The Dartmouth Refinery Shutdown, and Converted to a terminal in the fall, after a June announcement. The CSS Acadia turned 100, and Shell spent the sumer looking for offshore oil