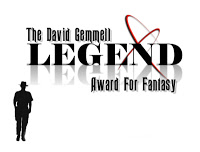 The Gemmell Awards were created in honour of fantasy novelist David Gemmell who passed away in 2006. Gemmell created fantastic worlds built on magic and adventure with epic battles between good and evil.

Each award is named for one of his dramatic and atmospheric novels.

Words of Radiance by Brandon Sanderson

“The war with the Parshendi moves into a new, dangerous phase, as Dalinar leads the human armies deep into the heart of the Shattered Plains. Meanwhile Shallan searches for the legendary city of Urithuru, and Kaladin, leader of the restored Knights Radiant, masters the powers of a Windrunner.” Discover

The Morningstar Award for Best Fantasy

The Emperor’s Blades by Brian Stavely

“The children of an assassinated emperor try to stay alive and avenge their father’s death while continuing down their individual life-paths, one in a monastery, another training with elite soldiers, and one appointed a minister determined to prove herself to her people.” Discover