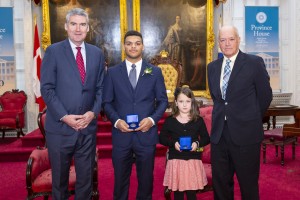 The Medal of Bravery is awarded each year to Nova Scotians who have risked their life protecting the life or property of others.

This year’s recipients are Sophia LeBlanc of Amherst – the youngest Nova Scotian to ever receive the award – and Elijah Watts of Port Hood.

“People like Elijah and Sophia make our communities stronger and inspire us all,” said Premier Stephen McNeil. “On behalf of all Nova Scotians, I want to thank and recognize them for their bravery.”

On Nov. 11, 2018, six-year-old Sophia LeBlanc was a passenger in her mother’s car when it lost control and landed upside down, submerged in a river near Oxford. Sophia freed her youngest sibling from the car and then climbed a steep hill to flag down help for the rest of her family who were still trapped in the car.

On May 12, 2018 Elijah Watts was fishing with his father and another fisherman off the shores of Colindale in the Gulf of the Saint Lawrence. The vessel capsized and the occupants were thrown overboard. Mr. Watts pulled his father and the second fisherman ashore, regrettably, both men perished in the accident.

Quick Facts:
— this is the twelfth year individuals who have risked their own lives to help others have been recognized
— since 2008, 40 brave Nova Scotians have received the medal of bravery award