Foundation : the history of England from its earliest beginnings to the Tudors
(M) by Peter Ackroyd

“*Starred Review* The first volume of Ackroyd’s prospective six-tome history of England extends from Stonehenge to the extinction of the Plantagenet dynasty by Henry Tudor. The strongest impression Ackroyd acquired from his survey of land and time is that of the role that habit, custom, and contingency plays in shaping history. He repeatedly repudiates a view of English history as a conscious progression toward, for example, Parliament. Similar institutions associated with England, such as Christianity and common law, arise as incremental accretions in Ackroyd’s accounts.
His treatment of 1066 is characteristic. He concedes the consequentiality of the Norman conquest while emphasizing the persistence of native modes of life, such as the vernacular language that eventually, albeit not for three centuries, with Chaucer, supplanted the invaders’ French as the language of society and the governing elite. The battles for the crown supply most of Ackroyd’s narrative, but while the Hundred Years’ War and the Wars of the Roses rumble on, the peasants till the soil, quaff ale, and periodically raise pitchforks and torches. The hugely popular Ackroyd’s ease of erudition ought not to be missed.” – Booklist
The First Frontier : the forgotten history of struggle, savagery, and endurance in early America (M)
by Scott Weidensaul

“The paired terms of frontier and Indian often conjure up images of cavalry troops and eagle-feather-bonneted Sioux or Cheyenne warriors struggling across buffalo-laden plains. As this exciting and revealing chronicle shows, the original frontier was in the East, stretching from the tidewater to the foothills of the Appalachians, and from Maine to Florida.
Weidensaul, an author and naturalist, provides a stirring panorama of the land and the peoples who made their mark on it from the late sixteenth to eighteenth centuries. The land is described, in detail, as lush and enticing, but it was a lushness that could kill when it turned harsh and violent. Across this landscape, Weidensaul tracks the diverse and complicated mix of humanity who cooperated, fought, and transformed it, including various Huron, Iroquoian, and Algonquian Native American groupings and French-, English-, and German-speaking Europeans. This is a rich tableau that both excites and informs about the forging of early American society.” – Booklist
The Dust Bowl : an illustrated history (M)
by Dayton Duncan 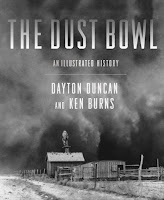 “Given our current drought and economic woes, the powerhouse team of Duncan and Burns (The National Parks, 2009) chose a sharply relevant subject, the Dust Bowl, for their latest book and documentary. This riveting, illustrated volume of vivid written and oral history extends the scope of the film (premiering on PBS in mid-November) and clarifies our understanding of the worst manmade ecological disaster in American history.
The Great Plains, a land of little rain and perpetual wind redeemed by buffalo grass, experienced a rare wet spell in the 1920s, just as homesteaders were encouraged to farm, and technological advances made it possible to plow up millions of acres of sod, exposing the soil. When the rains stopped in the early 1930s, fierce winds generated massive, rampaging, otherworldly dust storms. From struggling with the invasive, smothering dust to the immense folk migration as families fled west to FDR’s attempts to mitigate the disaster, Duncan and Burns chronicle every harrowing phase of this decade of human pain and environmental degradation. The result is a resounding chronicle of why we must preserve Earth’s life-sustaining ecosystems.” – Booklist