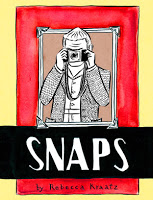 Share
Halifax has a secret that is becoming know to the world, i.e. that we have fabulous graphic novelists in this town.
I had been contemplating writing a blog on the latest and/or my favorites in this genre. And low and behold, I realised that most of them were by local artists. So here are some great local artists/graphic novelists that you may or may not know about.

I frequently see Rebecca Kraatz (M) in the library. So that makes her extra special in my mind. After all, libraries have to support our library lovers as well as they support us! Originally from the Okanagan Valley, Kraatzlives in Dartmouth. She has won the Doug Wright Award in 2007 for Best Emerging Talent for her first book, House of Sugar. This book collects a two-year run of strips that originally appeared in The Coast. They are an autobiographical look at her childhood on the Prairies and West Coast. Her graphic novel Snaps was inspired by an old photography album that she found at a flea market. Snaps takes place just before, during and after WWII in a tiny town in BC. 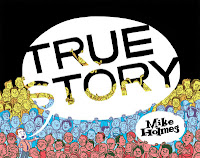 Another Coast artist is Mike Holmes (M), an illustrator and writer, who happens to also makes puppets, animation, and according to him, “a mean Empanada”. His strip True Story is one of the first things that I turn to when reading The Coast. He has published a True Story collection in book form. He has also published the books This American Drive and Shenanigans. His latest is Mikenesses : the book. It is a collection of self portraits in 100 different styles, those of his favorite artists such as Maurice Sendak, Dr. Seuss, and the Muppets among many others. He recently had a launch of this book at the Frigate Pub in Halifax. 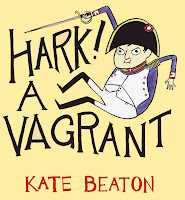 I am going to quote from the author’s own website harksvagrant.com.
“Kate Beaton (M) was born in Nova Scotia, took a history degree in New Brunswick, paid it off in Alberta, worked in a museum in British Columbia, then came to Ontario for a while to draw pictures, then Halifax, and now New York. Maybe the moon next time, who knows.”
Beaton publishs her webcomic Hark A Vagrant about once a week. I first came across this webcomic in it’s book form. The subject matter is usually historical or about literary figures. The on-line version won the 2011 Harvey Award for Best Online Comic Work. The book was named by Time magazine as one of the top ten fiction books of the year, with Lev Grossman calling it “the wittiest book of the year”.

And, to add an “adopted” son, I want to mention Bryan Lee O’Malley (M). O’Malley is best know for his New York Times bestselling Scott Pilgrim series of graphic novels . O’Malley, born in London, Ontario has lived in a number of places, including Nova Scotia. The series consists of six black and white volumes. Scott Pilgrim is a 23 year old Canadian Slacker and part-time musician living in Toronto with his gay roommate. Scott falls for the new girl in town, Ramona Flowers. But in order to woo her, he must defeat her seven evil-exes! Scott Pilgrim vs the World (M) became a critically acclaimed major motion picture and is now a video game.
I am sorry to those local artists I may have missed. There is a lot of creative energy in Halifax and I hope that everyone (including myself) is able to discover it. After all, we could be one of Mike Holmes True Stories!