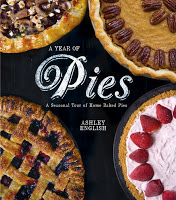 A Year of Pies : a seasonal tour of home baked pies (M)
by Ashley English 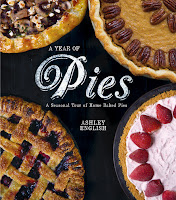 “*Starred Review* In her back-of-the-book acknowledgments, nutritionist-author English thanks husband Glenn for his pie-eating prowess, six months straight. Obviously, there’s a reason why many would volunteer for that kind of hardship, judging from the more than 60 recipes alone. English’s talent is twofold: repurposing a traditional dish while staying true to its food legacy and giving us foolproof instructions and color step-by-step photographs for making piecrusts right.

Also, her approach, as with all good chefs, is seasonal, as is her collection, divided into winter, spring, summer, and autumn. Interspersing savory with sweet, she proffers some intriguing, gotta-make-this kinds of pie: rosemary-bourbon sweet-potato pie, ratatouille and polenta pie, carrot pie, and buttered-rum shoofly pie. Tools and ingredients, along with an all-too-brief history of this delectable entree-dessert, make up her first chapters, with most space dedicated to recipes, great color photographs, tips, and variations for many.” Booklist
Skirt Steak : women chefs on standing the heat and staying in the kitchen (M)
by Charlotte Druckman

“After food journalist Druckman wrote the article “Why Are There No Great Women Chefs?” for food and culture journal Gastronomica, she was moved to further investigate the culinary gender gap in the United States. The answer to the question she poses is not that there are no great women chefs, but that most are unknown to the general public. Here she compiles the responses from interviews with 73 female chefs. They talk about what life is really like in the kitchen, the difficulties they face working in a male-dominated industry, and how they balance their demanding careers with motherhood, and offer advice for prospective chefs.

Druckman also addresses the media’s role in covering (or not covering) female chefs, how the industry has changed over the years, and where it is headed. VERDICT Chapters are broken down by topic and feature responses from multiple chefs, rather than presenting each chef’s interview as a whole individually, which can be confusing and may prevent readers from connecting to the individual personalities. However, Druckman’s book offers a different perspective and new insights than other available books about (primarily male) chefs. A valuable addition to food literature.” – Library Journal
Talking with My Mouth Full : my life as a professional eater (M)
by Gail Simmons

“Chef, author, and television Food Network personality Simmons recounts her life. Toronto-born before becoming a dedicated New Yorker, she had a unique upbringing in a family that valued the pleasures of good food. One of the aspects of her youth that sets Simmons apart is her deep attraction to South African food, developed on family visits to relatives there. She fell in love with dried meat strips (beef, chicken, antelope, and ostrich), which she recalls with great sensory detail. She also spent time in Spain and on an Israeli kibbutz. Returning to North America, Simmons enrolled in culinary school and labored in Le Cirque’s illustrious kitchens. Equal to her passion for cooking, her love for writing led to a career in food journalism, and she became an editor at a food magazine. In an emotionally affecting sketch, she reflects on the devastation wrought by her beloved elder brother’s mental illness.” – Booklist
Consider the Fork : a history of how we cook and eat (M)
by Bee Wilson

“*Starred Review* At every turn, Wilson’s history of the technology of cooking and eating upends another unexamined tradition, revealing that utensils and practices now taken for granted in kitchen and at table have long and remarkable histories. The knife evolved from primitive humans’ need to reduce food to manageable portions. Thermometers helped make home ovens practical. Some of the first pleas for animal rights arose from the use of caged dogs to turn spits in front of kitchen hearths.

Most societies weigh recipe ingredients, but Americans continue to measure ingredients by volume. Wilson traces this deviation back to the difficulty of lugging scales westward across the frontier. Wilson’s book teems with other delightful insights, laying to rest such questions as what Chinese parents say to their children to persuade them to finish their food, since they can’t employ the typical American admonition about children starving in China. (Answer: Don’t disrespect the sweat of the hardworking rice farmer.)” – Booklist 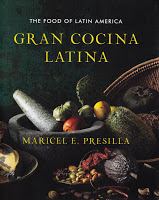 “Presilla is a Cuban-born chef and renowned culinary historian who won the 2012 James Beard Award for Best Chef: Mid-Atlantic. Her latest, a bible of Latin American cuisine, presents more than 500 recipes for both authentic and modern dishes, from adobos and sofritos, to popular empanadas, tamales, and ceviches, to the less familiar cachapas (corn griddle cakes) and picadillo (a seasoned beef hash).