AllyG: So, it’s obvious that I love Nicole Richie. I am such a fan. In fact, I even @ replied to her twitter account. She never answered. I cried.

She could have been another Tara Reid, but something clicked and Nicole turned it around. To steal from the Pipeline…

If one thinks back only a few years, it seems almost impossible that the spoiled, tacky chipmunk-faced Robin to Paris Hilton’s Batman in “The Simple Life” could have amounted to anything other than a cautionary tale on the excesses of L.A. stardom and the lows to which American culture can sink. But Nicole Richie continues to confound expectations, add to her style credibility, and make us smile.

While some may argue it’s a tad too bo-ho, I still adore Nicole Richie’s Winter Kate clothing collection which compliments her accessories line, House of Harlow 1960 (both named after her daughter Harlow Winter Kate).

L-A knows that I refuse to dress for winter. Gawd knows why I reside in Nova Scotia. I make do during the winter months with skinny jeans, sweater dresses and tunics, but there is no “Joie de vivre” if you will, to dressing during the crappy winter months. I wait rather impatiently for the first sign of spring and then I bring out all my summer dresses, dressy shorts (I could almost hear L-A retching at those two words together…let’s say ot again! “DRESSY SHORTS”. And they are a big trend for Spring 2010!) and flowy shirts. Not to mention the shoes. Oh, the shoes. Seriously though, wtf can you wear in the winter on your feet? BOOTS AND MORE BOOTS. I’m getting off-topic.

(All photos from Nicole’s site unless otherwise mentioned)

I’d like to note that I have these pics large on purpose. Sometimes L-A kindly fixes my crappy copy/paste/save + insert job on images. This time, the photos are appropriately large because Nicole deserves that respect. This is a sneek peek at Nicole’s profile in March’s InStyle mag, it does a great job of capturing Nicole’s personal style and how that influences her collections.

Now, in the above image I would like you to pay particular attention to the camisole. Love the cami. Every woman should own a cami. Whether to be worn on its own or under a blazer, there is nothing sexier than a camisole with a pair of jeans. 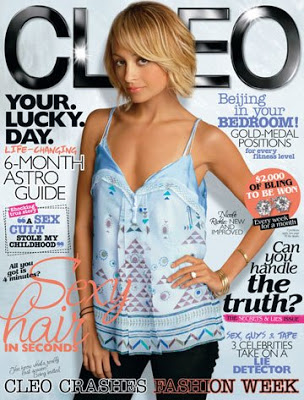 Oh, would you look at that?

As I’m writing this, I am imagining all the mean things that L-A is going to write about my best friend, Nicole. When kids would bully me in elementary school (like writing a charming sing-song called “Anorexic chipmunk” because I was a twig and had massive buck teeth), my mom would tell me to ignore them and STAY TRUE TO WHAT I BELIEVED IN. And so I proceed.

The reason I love this line is the reason I love Nicole’s style. Everything is so simple, it’s not overpowering at all.  I’m an accessory person, so it’s important to keep the clothes clean and not overly intricate.

Le sigh. It’s so perfect. Remember that contest that L-A mentioned? Well, if any of you bitches entered and win I will be devastated. Just know that. Also, Is it wrong that I entered BabyG in the contest? What?

I’m not the biggest fan of the shirts that resemble my grandma’s curtains.

None of us are perfect.

We knock celebrity designers, but I truly believe Nicole is different. Her clothes completely emulate her personal style, and it’s one I can get down with. In an interview with WWD, she notes that her key items for spring dressing are, “definitely a beautiful, fun slip dress in a great print and also a leather jacket to turn the romantic day dress into an edgy night-out outfit.” So correct, non? And also, I’m sort of into the grandma curtains now that I’ve seen it with jeans and a cami…

Combined with House of Harlow accessories and a Winter Kate vest = Perf.

L-A: I’m going to let Ally have this one. Because she loves Nicole and is still sad that she didn’t get a tweet back.  Also because I got home late and then had to go to the grocery store and ended up eating Sidekicks in front of my computer (classy. am total grown up). So I’m not going to go into a rant about how I’m not so sure Nicole has designed anything. I’m not going to say “WTF? It’s just a slip. I can buy that at any lingerie store”. I’m just going to let Ally have her Ode to Nicole.

I will say that I’m baffled by the pairing of the grandma curtain blouse with the grandma panties knickers (oops. Sorry. Ally really hates the p-word).  Stylist was clearly on crack. Last time I saw those underwear being modeled for public consumption, I was ogling Hugh Grant and Colin Firth in Bridget Jones’ Diary.

Although, eating Sidekicks while reading Ally’s post was kind of an appropriate choice. You know, seeing as Nicole got her start as Paris’ sidekick. Okay, a bit of a stretch. Let’s just watch that heartbreaking salt shaker ad:

That’s probably how Paris is feeling these days, now that she’s completely irrelevant and Nicole has her questionable line of clothing.