On a Friday night in Brisbane after my pal Maria got off work, I met her at a cute little bar called Super Whatnot in the heart of Brisbane CBD.  It was pretty packed with a 9-5 kind of crew; colleagues heading out for a Friday night drink to cap off the week.  We had a couple drinks there before heading back to M’s hood in New Farm for some dinner at Cru Bar; a swanky wine bar/cellar that I’d had my eye on since arriving in Brissie.

When we got to Cru, it was so packed that we had to be strategic about seats – both of us were subtly eyeing the crowd, willing someone to leave!  The rain had started to pour on the way over from the CBD and we were both frigid and soaked to the bone. In the meantime though, we ordered a bottle of wine and got to work on the menus.  Since M is a Barossa Shiraz-lover, we ordered a btl. of the Maximus Shiraz, one of those ‘cheap n/ cheerful’ wines with just a bit of bite. 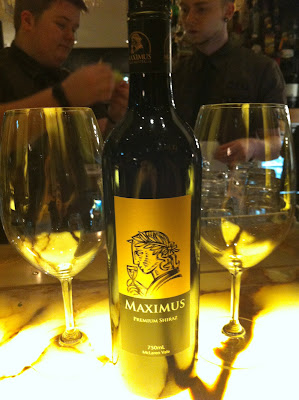 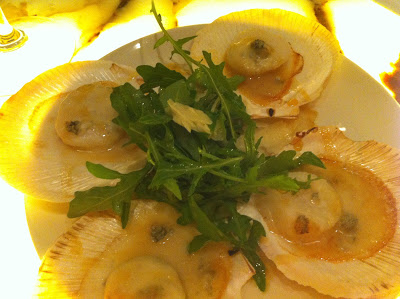 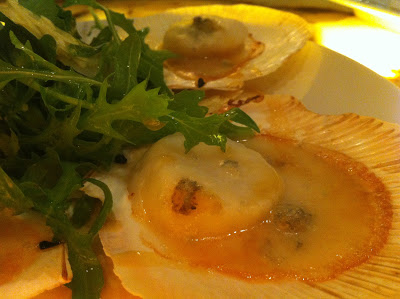 We had already decided on our order when I spied the Specials board and we had to re-jig.  The menu actually featured Digby scallops!  From Nova Scotia!  Not to mention the fact that they were served on the shell in a silky Gorgonzola cream sauce.  The sauce was so lusciously pungent (sounds like an oxymoron, hey?), that I later ended up dipping my fries in the remaining sauce as opposed to the aioli that they were served with.  The scallops were not all that amazing; though the meat was slightly sweet and succulent, the bi-valves themselves were slit in two, so the portion size ended up being pretty meagre. 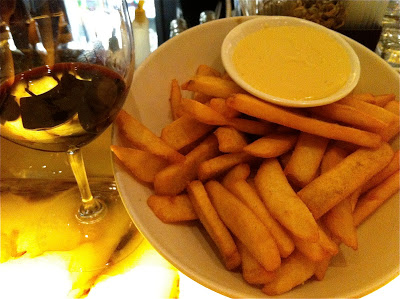 A cheese from Mt. Tambourine, QLD 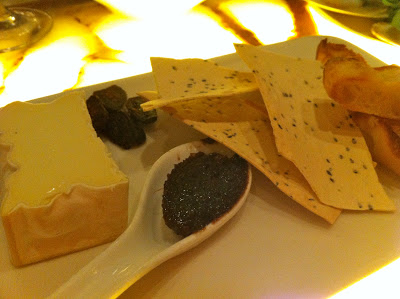 What a lovely little platter!  The Brie was so creamy and robust.  Served with crispy lavosh, an Armenian unleavened flat bread; Pide, a Turkish flat bread, Iranian figs and a tender quince paste, the cheese’s smooth texture was a great contrast to the crisp cracker and marmalade-like fruit paste.  It was quite the multinational plate.

Since we were both suffering from a nasty cold/cough, I picked up a btl. of spiced rum on the way home and proceeded to make Maria and I hot buttered rums when we went home.  I had a headache the next day – more likely from the rum than the cold – and was quite concerned about the amount of butter consumed the night before, but it was well worth it.  If I do venture back to Brissie again, Cru Bar will, once again, be on my list of eateries to visit.

A cold night warms up at Cru Bar
https://haligonia.ca/a-cold-night-warms-up-at-cru-bar-67464/