Without fail every week if not more often I will check my normal social networks and I will come across a post, meme, video or blog dragging out the tired image or the poor bumbling helpless dad.

Most times I just roll my eyes and keep on scrolling. But sometimes I really have to shake my head as I wonder why the person shared what they did.

Often times they are calling out their own spouse in a very public manner for trying to do something that was unfamiliar to them. I rarely see the humour in the faceflogging that takes place with person after person chiming in to say how funny this failure is. It’s like my whole social network channels their inner Nelson Muntz. 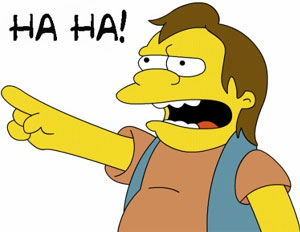 If you are considering posting something about how your silly, well meaning, but ultimately failure of a spouse messed up I would like you to consider 3 questions;

1.  Was it one of their normal responsibilities?

My wife is a smart and capable person. We got married while we were both still in university. Because of that she never had to get used to cooking and grocery shopping for anything beyond college living.

Once shortly after we were married she did the grocery shopping for a change. To my surprise she bought a rather large package of ground pork. When I asked why she legitimately had no idea that she hadn’t bought the ground beef I asked for. To me the products look completely different. But since she didn’t normally do the grocery shopping and never handles raw meat she simply saw a package of ground meat and tossed it into the cart.

It is easy to make simple mistakes when doing something unfamiliar.

2. How much experience do they have?

When we get good at something it is easy to forget how hard it was at first, sort of like driving. Think back to those first few times behind the wheel. It was so nerve wracking! It took so much focus and attention. But now you jump in the car and barely give what you are doing any thought at all. 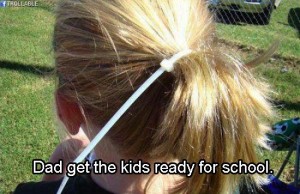 One of the things I think you should never make fun of a dad for trying to do is putting their daughter’s hair in a ponytail. Of course some of us are asking for it.

Mom’s I don’t think you take time to consider how much more experience you have compared to the average dad. Before you had a daughter that needed her hair put up how many ponytails did you make in your own hair? How about in someone else’s hair, like for someone you used to babysit?

I don’t know about you, but before I had a daughter that needed her hair put up I know exactly how many ponytails I tried before – zero, zip, zilch. Don’t even get me started about braids. I am still not great at putting in a ponytail, but I am learning. It takes skill to figure out how to gather up all the hair, hold it properly in one hand and twirl elastic with another.

It is easy to forget how hard something is when you get used to doing it.

Do you remember the time when you were learning to ride your bike and you fell off, and your parents laughed and laughed at you? Than they called over all their friends to point and laugh at the poor crumpled heap you were on the ground. No? That’s probably because they wanted you to succeed and they realized ridiculing your failure wasn’t likely a great motivator.

The same people I see making fun of their partners for trying, tend to be the ones that complain that their partners don’t help out around the house/in the kitchen/with the kids enough. You can’t have it both ways. You can’t make fun of them every time they try and expect them to be ready to jump up to help.

You can make fun of the failures or you can encourage their effort. You likely can’t do both. 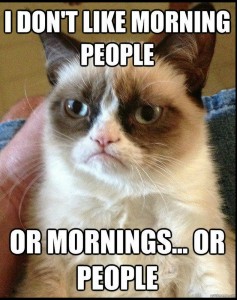 I don’t want to sound like a kill joy. It is a good thing to be able to laugh at our mistakes. But it isn’t funny to be laughed at because of them. Maybe instead of making fun for dads who are trying you could consider posting a picture of a grumpy cat. That guy always cracks me up.

Christopher Drew is the pastor at Sackville Baptist Church. He is the father for three and the husband of one. He is a self professed geek and gamer. Read more about family, faith, and geekery at http://ModernManOfTheCloth.com