What did the glove say? You can’t find me!

As winter approaches, many things change that really put a damper on a parent’s style so to speak.

The temperature drops, meaning outside becomes less of an option.

And the amount of clothes needed to get out the door in the morning increases to a monumental level.

Coats, boots, sweaters, hats, gloves, scarves and of course back ups for all of these (especially if your kids are still in a daycare).

What has become a struggle for us during this chilly transitional period, is the amount of gloves, mittens and hand warming devices we have gone through already.

Where do all the gloves go? Do they vanish into some vortex? 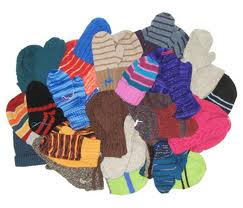 Since the school has asked for gloves for both boys, we have already officially lost two pairs and unofficially three pairs (we are still hoping).

It is only the start of November. What is going to happen when snow comes?

It is crazy. Every day we check over the gear going out, and at the end of the day when home, the tally hardly ever matches up. It is always those darn gloves.

We have learned a few tricks over the years from the professionals. Our baby has his attached to his coat with a string. Those are not going anywhere.

But he is not exactly active enough to lose them.

Our four-year old, that is another story. He literally tells us stories of how he threw his gloves in the air and into trees etc. Sorry gloves, not much a string can do for you.

So what do we do to fix the problem? Well we use the big bandage approach of just buying more.

On the weekend, we found a three-pack for four dollars at Target. Problem solved.

Well until he comes home today without gloves and story right out of fantasy land.

So what did the glove say? In my mind, I hope it says, please find me before you go home.

Good luck to all the parents who fight the good fight against lost mitts, hats, socks and other sneaky clothing.

Michael is a marketing manager by day, who has been at the blogging thing for almost a decade. Father of two, husband to one and griller to the Gods. Read more about his parental adventures, including his current stint on parental leave on his blog, Like A Dad.

A Dad's Life: What Did the Glove Say?
https://haligonia.ca/a-dads-life-what-did-the-glove-say-84630/