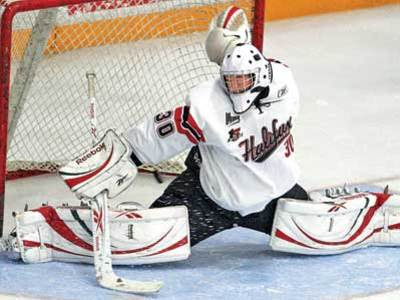 The media lounge at the Centre Bionest in Shawinigan was crammed with NHL scouts as the Halifax Mooseheads took on the Shawinigan Cataractes Saturday afternoon.

They were there to check out Mooseheads goaltender Mathieu Corbeil, who after the mid-season NHL central scouting report, is sitting third amongst North American goaltenders.

Al Jensen with NHL Central Scouting says he loves size and athleticism of Corbeil. When asked if he could compare Corbeil to an NHL goalie, Jensen said he couldn’t think of one that was as big as Corbeil.

And despite losing 3-2, Corbeil put on a clinic for the scouts in attendance. He faced 28 shots which included three breakaways, one which was a 2-0 rush.

But this story isn’t just about Corbeil.

In the depths of this losing season for the Halifax Mooseheads I want to point out to everyone the light at the end of the tunnel.

Corbeil has been standing on his head all year. Imagine what he’ll be like when there’s a team in front of him.

The team’s defensive core is largely made up of 17 year olds. This is a Midget AAA lineup. They will be a good team in front of Corbeil one day.

The team isn’t stacked geezers either, despite being able to carry three 20-year-olds, Linden Bahm is the only over-ager on the roster.

It’s hard to say what the team will do with this situation. Knotek would take up both a 20-year-old spot and one of the two European player spots. I think the team is leaning on keeping Peter Delmas to help Corbeil with the load. And it’s a tossup between the rest, but it’s likely some of them will be on the trading block during the draft.

Generally teams don’t like to use up one of the three 20-year-old spots and one of the two European spots for one player. But the team will probably make an exception for Knotek. He is scoring goals, he’s the captain and he has a no-trade clause.

Then there’s players like Brent Andrews. Andrews played in the World U-17 Championships for Team Atlantic in Timmons, Ontario over the Christmas break. He was player of the game twice and scouts with Hockey Canada say he was one of the best, if not THE best winger on the ice at the tournament. Expect big things.

Defenseman Konrad Abeltschauser has already started to pack some pounds on the lanky frame he came to us with in August. I’m sure with a good stint of off-season training he’ll be a blueline bruiser.

Bradley MacDonald who was a second rounder in 2008, had a tough go in Victoriaville and Quebec and refused to report to PEI. He finally ended up where he wanted, which despite my concerns about such an attitude of a player, it has worked out for the Mooseheads in the end. Expect some numbers from him in the future.

Then there’s the fact that the Mooseheads have a bounty of draft picks this year.

The team has their own first round draft pick, and looking at the scenery right now, it’s going to be the 1st overall pick. The one unfortunate thing, is this year there are no clear-cut number oners coming up through the AAA ranks.

I’m almost giddy when I think of the potential of this team down the road, then I remember we still have this season to get through. Hang in there fans!

A diamond in the very very very rough.
https://haligonia.ca/a-diamond-in-the-very-very-very-rough-17664/