[I’ve been talking a lot about writing here lately. So, rather fittingly, this next guest extends the conversation in the ongoing East Coast Guest Posts series.  If you’re interested in telling your East Coast By Choice story, e-mail me at kimberly.aliasgrace [at] gmail [dot] com for submission guidelines.] 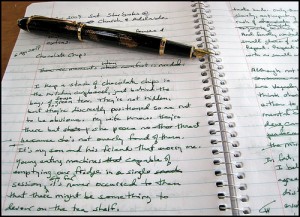 As we roll on into 2010, I’ve been doing a lot of thinking, planning, and reflecting. I feel that this is going to be a significant year for me, and despite all the setbacks and challenges I’ve had over the last few years, I’m glad that I’m going to be doing what I’m doing here in Halifax, the place where I was born, and the place I enjoy living.

Like many Atlantic Canadians, I moved away for a while. I moved to Kingston, Ontario in 1996, and I moved back to Halifax in 2002. In those six-and-a-half years, I tried self-employment, worked for the Kingston hospital, worked at Queen’s University, bought a townhouse, left a long-term relationship, and got married. I also took some writing courses at St. Lawrence College (where I found my mentor) and had a short story published in a science fiction magazine run out of Sudbury. The writing was never far from my mind.

I think I manage to just slide onto the edge of the category called “Published Author”. I did get that one paying gig, and I’ve also written for and edited newsletters (the Dalhousie IT newsletter when I worked there, my own Star Trek club newsletter, The Kingston Area Home Business Association newsletter, and the Theatre Arts Guild newsletter here in Halifax after moving back). And now I have my blog. And (chuckle) I even had one of my tweets from Twitter published in a free Vancouver newspaper a few days ago. I’d love to know the chain of retweets that made that happen.

The writing, as I said, has always been there, and I’ve always gone back to it, no matter the length of time away. The ideas come fast and furious, but the motivation to follow through has sadly been lacking a lot of the time. I won’t get into my personal demons here, but suffice it to say that I have three half-finished novels and a bunch of short stories sitting on my hard drive collecting virtual dust. I’m great at starting things, but not so much the finishing.

But late in 2009, something changed. I signed up for National Novel Writing Month (NaNoWriMo), and over the course of November, I managed to write a 66,000-word first draft of a new novel and actually bring the story to complete and mostly-satisfying conclusion. Some motivation crept in from somewhere, and I rode its wave. It was nothing short of exhilarating.

So at last I am the proud papa of a complete first-draft manuscript. I’m now in the editing process, and I’m actually pleased with what I’ve written so far. It’s flowing better than I thought it would, and I think that, with a few structural changes, it’s going to turn out pretty well.

I’ve set my novel in Halifax, which, in and of itself, is not an unusual thing, because there are lots of novels set in Halifax. But what I think is different about this situation is that mine is a science fiction/fantasy novel, and I think I’d be hard pressed to find many of those set in Halifax. Even better, part of the story takes place in an alternate Halifax, where some things are familiar, and others are not.

It’s even a great place to set a story. Any kind of story.

2010 is going to be a good year. I’m going to get this novel into publishable form and get it out there. I’m going to keep working on my blog, and develop some strategies for increasing readership. It’s not about self-aggrandizement. It’s about saying what’s important to me and getting the words out there. And it’s about being happy where I am. And I mean that mentally, emotionally, and geographically.

And those demons I mentioned? Well, they’re quietly packing their bags and casting furtive glares at me as they shuffle out that little door in the side of my head.

Eric Rountree (@faltarego on Twitter) is a forty-something creative cynic with a taste for twisted humour, alternate realities, and really great cheesecake. A former computer systems admin, Eric is now whacking away at creative projects while working in a bookstore to pay the bills. He is married to a lovely and talented singer who also runs an office and teaches voice and piano. He thanks Kimberly for the opportunity to express himself on her blog.

A Novel Look at Halifax
https://haligonia.ca/a-novel-look-at-halifax-10567/