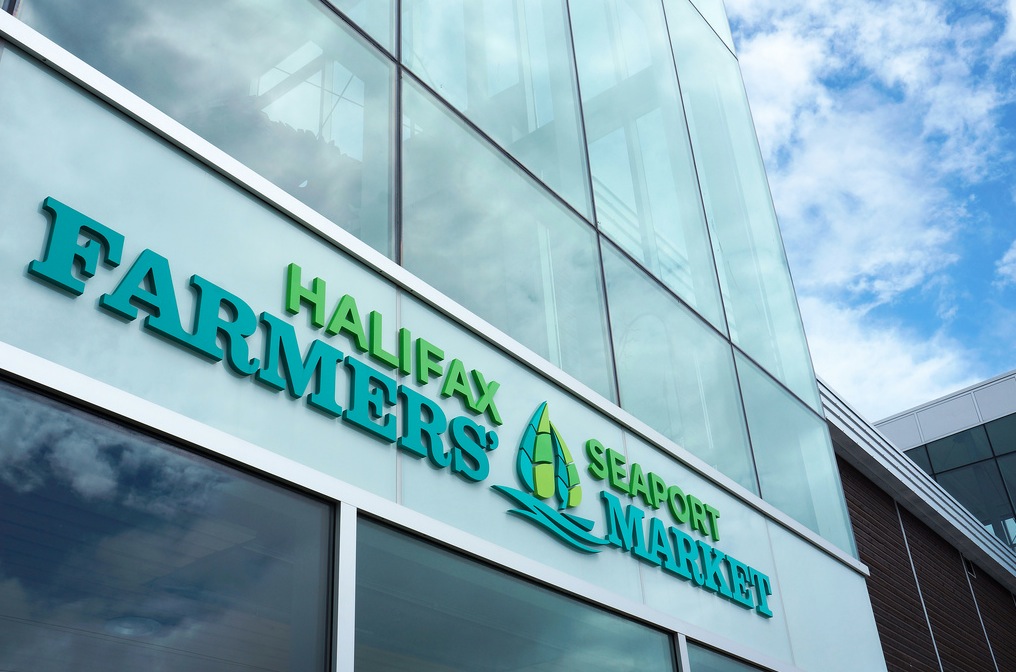 Major changes are coming to the Seaport Farmers’ Market, starting Monday. Over the next couple years, the market’s new manager, the Halifax Port Authority, is overhauling Seaport to make it more customer-friendly.

Market-goers will see the main stairs demolished to make way for a new entrance. Two new staircases will straddle each side of this entrance, with bleacher seating for customers who now sit on, and clog, the main stairs.

Above the new stairs, a bar-height counter with stools will run along the railing. Currently customers balance their drinks there while surveying the bottom floor of the market.

The living wall, which currently exists in a zombie state between dead and alive, will be removed to make way for the new entrance. The wall was originally imagined as an indoor vertical garden and natural air filter, but lack of light and water prevented growth, and the plants that managed to grow attracted mice.

To make up for lost greenery, Seaport plans to give away potted houseplants to customers at the new front entrance—rodents not included.

Visitors will also see two new bathrooms, another set of stairs at the south end of the market and a community kitchen. The Seaport website is also undergoing a redesign. To allow for messy, noisy renovations that might otherwise bug customers, the market is now closed Monday through Thursday.

The changes come after more than two years of uncertainty over the future of Seaport. Since last spring, several vendors have jumped ship and those remaining voted to bring in new management last May. Investors have yet to be paid, and the port authority won’t say how much the new renovations might cost.

Before Seaport opened in 2010, more than 500 investors poured between $1.5 and $1.7 million into the market, which cost $14 million to build. Media attention around the project was positive, and most Historic Farmers’ Market vendors, believing Seaport would be successful, packed up their stalls and made the switch.

Soon, though, it became clear the City Market of Halifax Cooperative was $9 million in debt and revenues weren’t high enough to pay it down. In November, 2011, the coop realized its business plan wasn’t working, and retained consultants to restructure Seaport and act as interim management.

The consultants held meetings with stakeholders, vendors and creditors, analyzed the design and layout of the market, surveyed 744 customers and 170 vendors, and produced an operating budget.

But the coop was facing a potential lawsuit from one of its contractors and it became clear to vendors that something had to change. They could seek creditor protection, go bankrupt and/or put the port authority at the helm. Forty-two out of 48 coop members voted last May for the port authority to take over the 40-year lease.

When they did, the coop dissolved and the port authority said it wouldn’t take on the debt. It’s unclear at this point whether investors will ever see their money. 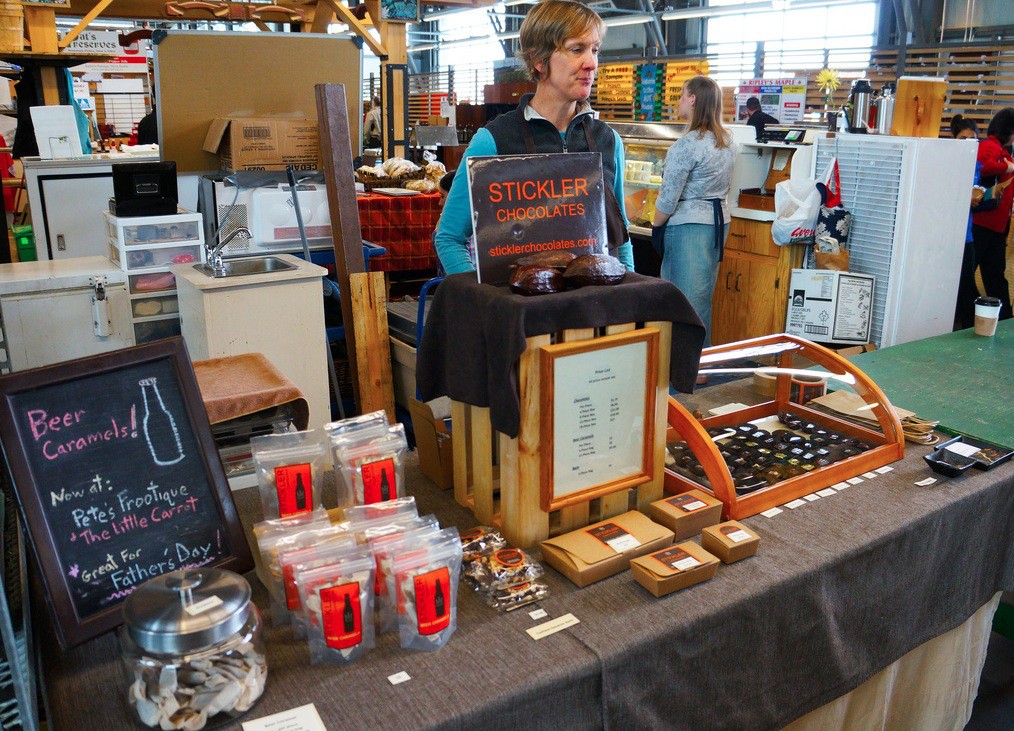 At the end of January, it became official that The Fish Shop, a Seaport staple, wouldn’t renew their lease. But by this point, other vendors had already left.

Brian and Keith Boates of Boates Farms, a small-scale apple, pear, cider and vinegar producer, pulled out of the market when it became clear the port authority would take over.

“I felt duped a little bit, to go, and then when we got there, it wasn’t what we expected,” Brian Boates said Saturday while tending to his stand at the Historic Farmers’ Market.

The coop told the Boates family Seaport would be a traditional farmers market with quotas for primary producers like themselves, and caps on vendors selling the same product, which enticed the family to move to Seaport.

“It certainly didn’t shape up that way,” Boates said.

When the coop moved to Seaport, they became more relaxed about enforcing bylaws that protected small vendors, Boates said. He questioned managers about the bylaws and finances, he said, but they wouldn’t give him a straight answer.

When the port authority took over, the market became public with a for-profit mandate. That’s fine for large farms, but over time small-producers tend to be out-competed in that type of structure, if they don’t grow, Boates explained.

Private non-profit cooperative structures like the Historic Farmers’ Market, on the other hand, protect small vendors by setting caps on those who sell, for example, bread or apples. At the Historic market, there are three apple vendors selling three different kinds of apples, and management has capped the number of bread vendors at seven.

“In Nova Scotia, we still have our small family farms, and we should be supporting them more so than building let’s say an American-style public structure,” Boates said.

Also tempted by the new market, Pickford expanded his business to Seaport. He had low expectations of turning a profit, but thought his business would do well in the long term. Instead, the tofu stall operated at too large a loss, so he retreated to his stand at the Historic market.

There were a few reasons the small-scale primary-producer said he was in over his head. For a start, rent was three times as high at Seaport. Vendors got a discount on rent by operating more days of the week, Pickford said, but he couldn’t afford to pay staff for those additional days.

And, he said, there were more than enough people selling the same thing: “Our apple sales dropped, our cider sales dropped from close to 75 jugs a week to maybe six, because there were three other apple cider vendors within eyesight of our booth.

“It just consolidated too many people selling the same thing, to try to gain the revenue to make their overhead.”

He sold nut butters, but there were two other vendors selling nut butters. He sold Just Us coffee, but three other people sold coffee. The market was diluted enough that he and his competitors weren’t turning a profit off these items.

“If they’re a local, small-scale farmer, they’re doing everything themselves,” she said. “They’re farming the fields and then they’re also coming to the farmers market.”

“So when it gets to a point like at Seaport when they’re expecting the farmers to be there more than one day a week, or three days a week, then that jeopardizes the viability of a small-scale local farmer to be able to keep his business going.”

Pickford said he’s benefitting from the coop model at the Historic market. He and Boates said their sales are decent this season, and their regular customers know where to find them.

Last Thursday, during a World Café-style event, the port authority told vendors renovations were about to begin.

One vendor, who didn’t want his name used because he wants to maintain a good relationship with Seaport, said the World Café meeting was “a bit misleading and manipulative,” and he wasn’t given the opportunity to ask how many days a week the market would be open.

However, he said the turnout of more than 100 vendors was positive, and he felt somewhat reassured by the fact the meeting took place at all.

“Am I feeling reassured? A little bit, I am, yeah. I do get the sense that someone is actually steering the ship now.”

The first time he realized the market was in good hands was when he received an email from the port authority, and then a follow-up phone call to confirm he got the email. He was delighted to see that management had “the time and resources to actually call us and make sure we’re on the same page”

Several other Seaport vendors Haligonia spoke to last Saturday were happy with the market’s new direction.

“Seaport is going to have lots of renovations so I believe it will be better,” Turkish cuisine vendor Coskun Ayazoglu said. Though he started at the Historic market, Ayazoglu was happy overall with Seaport, and plans to stay put.

“Things will be better,” he said with a genuine smile.

Seaport Farmers’ Market manager Julie Chaisson said her market is focused on building a customer-friendly space, and vendors will benefit from that.

“It’s farm-to-table, whether you shop at one market or another,” she said.

“It’s about a philosophy around local food, primary producers and connecting the producer with the customer.”