It was day one of a whirlwind three day tour of Cape Breton. My husband is one of those drivers who doesn’t like to make pit stops at leisure. As a “cultural explorer”, it is sometimes painful to drive past something worth stopping for (at least in my eyes). 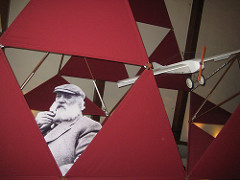 That being said, imagine my astonishment when I said to my husband 5 km outside Baddeck “hey, let’s see the Alexander Graham Bell centre” and he said “yes”. As a kid, I always wanted to visit. Partly because growing up, I remember my parents had coasters with an exterior photo of the centre.

The centre is managed by Parks Canada and it is here where you’ll find artifacts, audio-visual programs and photographs that tell the story of Alexander Graham Bell. This remarkable inventor and humanitarian, Bell taught deaf people to speak, transmitted sound to graphophones, created man-carrying kites, airplanes and the fastest boat in the world. Oh, and he invented the telephone. 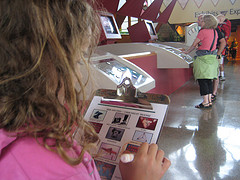 Inside the centre, our daughter was handed a Seek and Find activity where you matched items to those in the exhibit and then circled them. After a 25-minute talk about his life and accomplishments, it was clear that this lifelong learner loved children. In fact, the exhibits painted this family-man as one who was inspired by them. On display were early models of phones, kites, the original record-setting hydro-foil boat (HD-4), and original parts of The Silver Dart airplane. 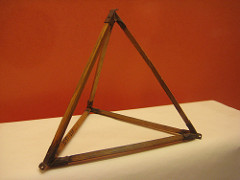 By this time, my son was intrigued. When asked what impressed him he said that he liked how Dr. Bell experimented with air conditioning. My daughter liked the talking tube. My husband and I liked the tectrahedron (a triangle) that Bell considered the perfect structure. Bell used this shape in his kites and there was an area in the exhibit where kids could make their very own tetrahedron.

Across the Bras d’Or Lake, is Dr. Bell’s family estate “Beinn Bhreagh” meaning “beautiful mountain”, it was here where Dr. Bell and his wife Mabel spent much of his last 37 years.

Back in the car we went, after stopping for ice cream (our daughter was handed a coupon when she passed in her Seek and Find activity). Next stop, Louisbourg.

The Flight of The Silver Dart

The Village of Baddeck