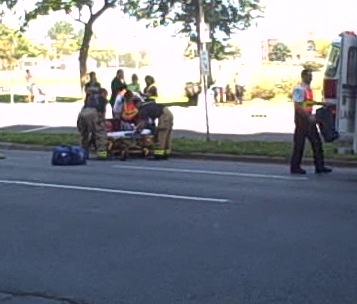 A pedestrian riding a motorized scooter was hit by a compact car at Robie and Welsford today at around 1:45pm.  The victim was taken by ambulance, no information on the condition of the individual is known.  A woman, presumably the driver of the vehicle, stood nearby, visibly shaken as the vicitim was lifted into a stretcher.  This crosswalk is notorious for accidents (most recently in June 2009 – GO #09-88315) and has been the scene of two fatalities in past years, prompting the city to make changes to the crossing.   From Halifax Police:

Injury Accident
GO # 127400
At 1343 hours , police responded to the intersection of Robie and Welsford in relation to an injury MVA.  Upon arrival police learned that a 58 year old female traveling in a motorized scooter stopped at the marked crosswalk, pressed the button and attempted to cross the three lanes of traffic.   Two of the South bound lanes stopped for her but a driver in the East most lane failed to stop for the female and struck her.    The 58 year old female was transported to the QE II with serious but not life threatening injuries.  The 31 year old driver of the vehicle was issued a ticket for failing to yield to a pedestrian in a crosswalk.

Video after the break.