I’ve been mulling this post over in my head for quite some time now, after joining a book club that was planning to read Don Quixote (M). The point of the book club was to read those long, difficult books that you’ve always meant to read but never gotten around to. My friends had been meeting for awhile and Don Quixote wasn’t the first book that they tackled, but it was the book that grabbed my interest and I was ready to finally read it.

Excited, I got a beautiful new hard cover edition and dove in. I made it about 100 pages and then I had to admit defeat. I will honestly admit that I was surprised. Long books don’t bother me, I didn’t find the writing difficult, nor the arcane references off putting: none of the things that I thought would make Don Quixote a book a couldn’t read were the things that made me stop reading. The simple fact was, I just didn’t care and caring is a necessity in a book of that length. Don Quixote isn’t a book I can’t read, it’s just a book that I won’t read. I just didn’t like it, story arc and character development are very important to me in a novel, plotwise I found Don Quixote too episodic with an infuriating protagonist who never progresses. One of the book club members who stuck it out casually described Don Quixote as a 17th Century sitcom for an era without television. A 17th Century version of me might have loved Don Quixote, but 21st Century me would rather just watch Happy Endings (M). 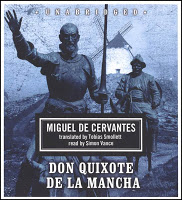 All the while I was struggling through Don Quixote, I was thinking about a colleague of mine who cites it as her favourite book of all time. The whole experience was a good reminder that reading is a personal experience, and much as we might like to say that one book is good and another book is bad, the truth is that each book is good or bad for each individual reader. With that in mind, I approached some of the other bloggers for the reader and asked each of them to tell me about a book they just couldn’t finish and why.

Despite my best intentions, I couldn’t even get through a quarter of The Corrections (M), the 2001 literary fiction “masterpiece” by Jonathan Franzen. My main critique calls to mind a scene from the movie Amadeus (M):
Emperor Joseph II: “My dear young man, don’t take it too hard. Your work is ingenious. It’s quality work. And there are simply too many notes, that’s all. Just cut a few and it will be perfect.”
Mozart: “Which few did you have in mind, Majesty?”
Franzen’s dense, bleak, yet darkly humorous tome with its social satire and dysfunctional family was too slowly paced for my tastes. It had too many words! But what do I know? It won the National Book Award in 2001, and numerous other accolades. This book gained notoriety when the author questioned his selection as an “Oprah Pick”, worried that it would be seen as a “woman’s book”. Well, this was one woman who was able to walk away.
From Lynne:

I review books for Simon & Schuster. Recently they sent me one that I just could NOT finish. Usually I feel I owe it to the publisher to finish the book, but this time I had to call it quits. The book in question is The Placebo Effect (M) by David Rotenberg. I found the novel confusing with multiple characters and locales. Although there were many characters, I did not feel any connection to any of them. I couldn’t have cared less if they survived to the following chapter. The protagonist suffered from a condition called synaesthesia. The book reminded me of the TV shows “The Listener” and “Lie to Me (M)“, both of which I enjoyed, but the book just didn’t do it for me. I know others enjoyed the novel from searching “Goodreads“, so I guess I’m in the minority.
From Rosemary:

When I was a teenager Anne Rice was the Queen of the Vampires. So when Stephanie Meyer’s Twilight series (M)— featuring the story of vampire Edward, his human girlfriend, Bella and werewolf Jacob– came along, I thought I would love it too. I didn’t! Having Rice’s Lestat as my anti-hero meant that Edward just didn’t measure up. My idea of vampires are that they are dark, dangerous, mysterious and sexy as sin: which doesn’t match up with Meyer’s vampires who go out into the sun and glitter and are chaste. Although the Twilight books were originally targeted towards young adults, they gained a huge crossover fan base of mainly adult women. I, however, was not one of them: in fact I was unable to finish even the first novel. Meyer herself has said that the are books more romance than anything else, and I’m not really a fan of romance novels. That said, even though I did not become a fan of this series, I admire any writer and especially those who get so many people reading.

I confess that although Wikipedia tells me that Orlando (M) is considered to be one of Virginia Woolf’s most accessible novels, I abandoned this book recently after mere two chapters. I understand that Orlando was born during the reign of Elizabeth I. He does not seem to age – or there is time travel involved – and morphs from male to female. I understand this because I had to look up the plot. The plot of Orlando was not apparent to me upon reading. I think the problem was mood related. I was in the mood to read more of a plot-driven, fast paced book. I abandoned Orlando and picked up Run Before the Wind (M) which is number two in Stuart Woods’ Will Lee series (M). It was a much better choice for me at that time. I have not admitted defeated regarding Orlando. I have merely postponed the pleasure. (I have however completely and utterly abandoned Moby Dick (M) – was it wrong to cheer for the whale?).