Fifty years ago yesterday was the UK’s Great Train Robbery. As I listened to CBC Radio One’s fascinating recounting of this this infamous event, I recalled that train robberies have inspired many great books and films.

Here are but a few for your consideration. All Aboard!

Signal Red: a novel based on the Great Train Robbery (M)
by Robert Ryan

“8th August 1963: A team of criminals, led by a charismatic mastermind, commit a crime that will shock the nation – the great train robbery. In the early hours of the morning, the gang hold up the Royal Mail train en route to London, knocking the driver unconscious and escaping with millions. Angered by the sheer scale of the crime and under serious political pressure, the police are desperate to catch the thieves. As the men struggle to conceal their haul and huge quantities of money are discovered in forests and phone boxes, Scotland Yard determine to track them down, one by one, by fair means or foul…This fictionalized account of one of the most infamous true crimes of all times tells the thrilling story of one incredible robbery and fifteen men who risked it all for fame, fast cars, and more money than they could handle.” – Publisher

“Crichton now takes us to Victorian England in this excellent adaptation of his 1975 novel. We follow charming Edward Pierce in 1955 as he moves between England’s aristocrats and its criminal classes, planning the theft of a fortune in gold from a train. The story is well paced, with Simon Prebble’s outstanding reading, and contains a number of interesting characters, from bankers to safecrackers, pickpockets, prostitutes, and petty thieves. Numerous plot twists hold the listener’s interest nicely, while recounting Pierce’s 1856 trial offers many humorous moments. Crichton includes extensive commentary on Victorian society, which nicely frames the tale and helps one understand the historical period. A first-class production;” – Library Journal

“In 1876, the No. 4 Missouri Pacific Express pulls out of Kansas City for St. Louis. Among those on board is Henry James, the erudite and esteemed novelist and brother of the brilliant philosopher William James. Trying his hand at travel writing, Henry is beset, as ever, by hypochondria–in the form, in this case, of dire digestive woes. Suddenly the train is stopped and robbed–and not just by any bandits but by the legendary James Gang. Taken hostage by the brigands, Henry realizes to his unspeakable horror that “Jesse” and “Frank” are in fact Rob and Wilky, his long-lost brothers, who had disappeared during the Civil War and been presumed dead for more than a decade.” – Publisher

“Set in 1850s England, Marston’s excellent new historical series features a Scotland Yard detective with attitude. Inspector Robert Colbeck tends to look down on local cops and tells them so. When well-organized thieves derail and rob a train of gold and mail, Colbeck is in his element. Only insiders would know schedules and amounts, and the safe required two separate keys, so Colbeck targets post office, bank, and mint employees. As with his Elizabethan and medieval mysteries (e.g., The Vagabond Clown; The Bawdy Basket), Marston fuses realistic time, place, and events with believable protagonists. Strongly recommended.” – Library Journal

With No Remorse (M)
by Cindy Gerard 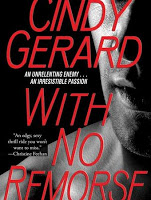 “Black Ops, Inc. operative Luke – Doc Holliday – Colter is taking some much needed down-time, making his way across the Peruvian Andes via rail, when banditos attack the moving train in the midnight hours.  It soon becomes apparent that robbery is not their intent but the abduction of super model Valentina, who is traveling incognito while recovering from a public scandal involving her ex-husband, high profile US Senator, Marcus Chamberlin.  Luke whisks Valentina off the train in a daring escape but the two of them become the targets of a relentless manhunt…” -Publisher

All Aboard - Train Robbery Novels
https://haligonia.ca/all-aboard-train-robbery-novels-80552/