10% off when paying cash

Genji Sushi has a large, clean dining room right on the Dartmouth side of the old bridge.

Our service was not exceptionally good – our servers didn’t seem that happy to answer our questions, but they were able to do so. The service could be improved if the servers stuck around long enough to explain the rolls to us, rather than abruptly dropping our plates and scurrying off.

We started with a simple order of sashimi, nigiri and soups. The nigiri rolls were quite small, which isn’t necessarily a bad thing. Knowing this, you can order many more of them, trying some of the more novel ones on Genji’s menu, like cuttlefish and mackerel.

The salmon sashimi did not strike us as being particularly fresh. More enjoyable were the red snapper and “white tuna”. 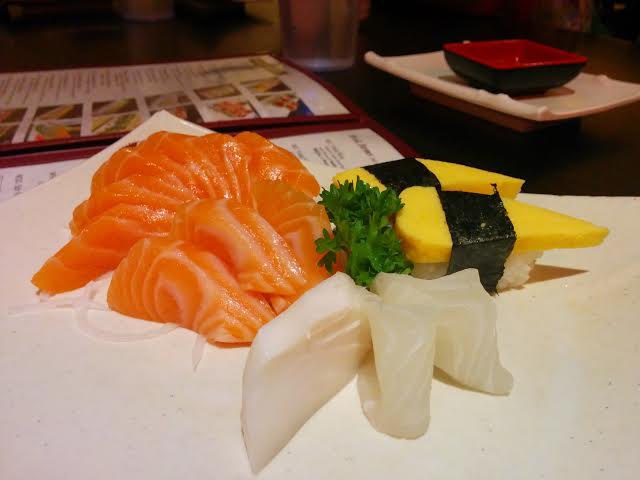 We also ordered a variety of tempura and fried items which were quite acceptable. PhotoJenn took great delight in the cream cheese won tons, while Talix protested that cheese does not belong in a Japanese restaurant. Om nom nom… cheeeese… what’s that, Talix?

The fried tofu was pretty lackluster, especially given the wonderful agedashi tofu experience I had at Wasabi Asian Cuisine. 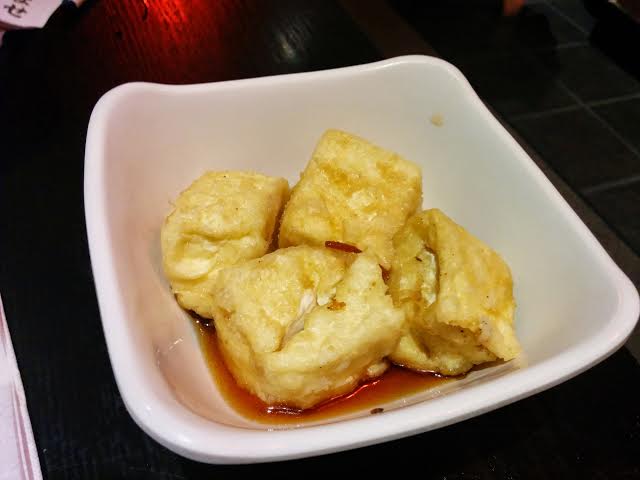 I will say this: Genji has a large menu. Not only does the menu feature cuttlefish, mackerel taro chips and soft shelled crab, but there is quite a variety of teppanyaki, wok items, and even some DIM SUM! All you can eat dumplings, anyone?

The dim sum menu (which I think is dinner-only, and is not posted online) includes fare like chicken feet, taro root and tendon – as well as several types of steamed dumplings.

We ordered some steamed pork dumplings and a couple of interesting dishes from the teppanyaki menu. The crowd really enjoyed the Beef and Scallion Rolls – thin slices of beef wrapped around green onions. The dumplings were also good. 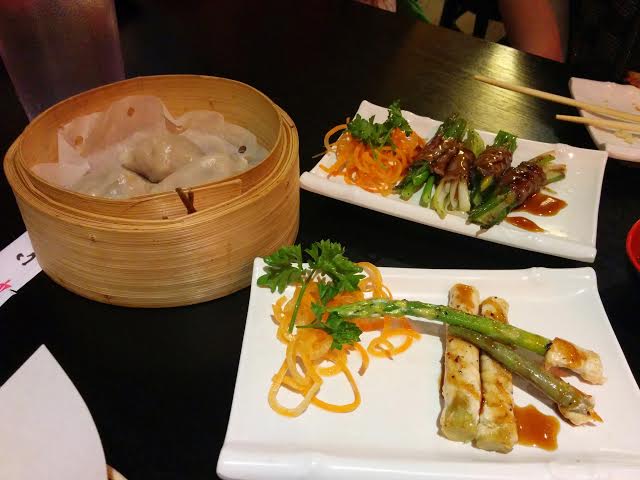 Another novel menu item is okonomiyaki, or Japanese pancake.  We ordered the “Seafood Okonomiyaki” and the only “seafood” that appeared to be on it was bonito flakes. It was drizzled with mayo and teriyaki sauce.

I think I was the only one who enjoyed this dish. Kind of reminded me of Vancouver’s Japadog – without the dog. 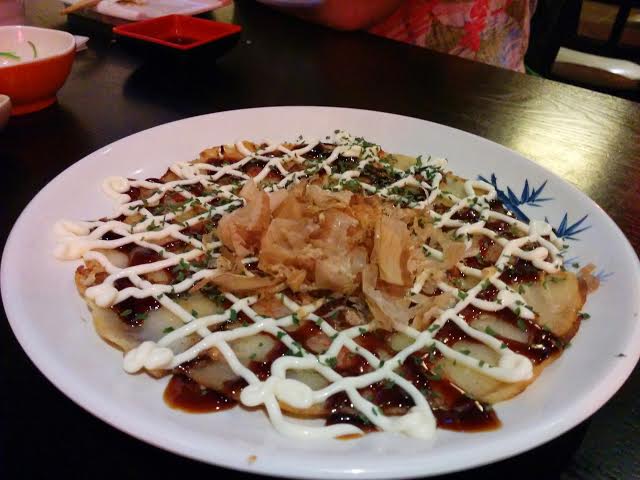 We ordered the avocado sushi pizza which was piled with avocado, onions, red pepper, teriyaki sauce and sesame seeds. It was okay, but not nearly as good as the sushi pizza at Wasabi Asian Cuisine.

I was also starting to notice that Genji is a little heavy-handed with the teriyaki sauce. You will notice, scrolling through the pictures, that it is drizzled on many of the items we ordered. 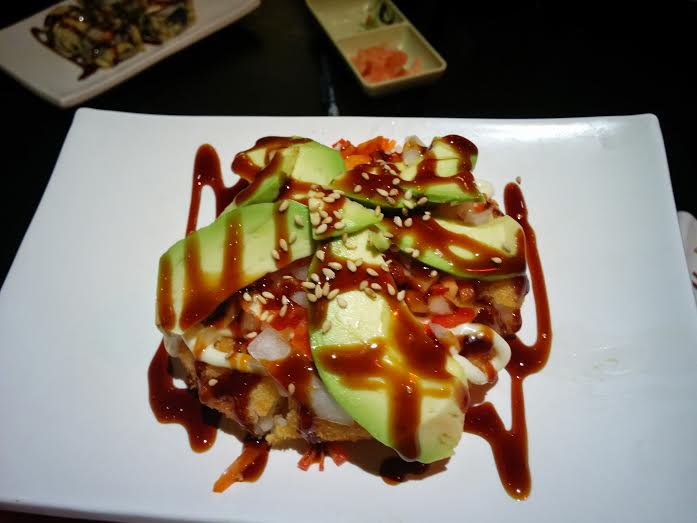 The other theme I noticed at Genji was the poor fish-to-filler ratio of the sushi rolls.  You can clearly see that this salmon and avocado roll is 3 parts avocado to 1 part salmon. It was tasty enough… because I like avocado. 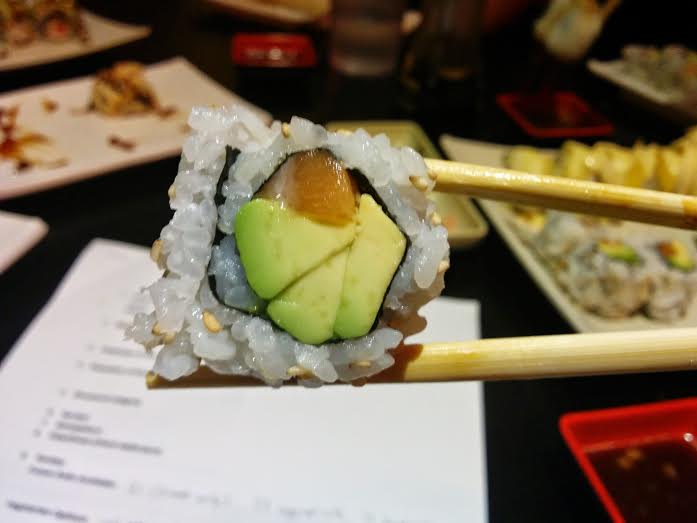 The Spicy Salmon Roll, as you can see, is suffering from an abundance of tempura flakes. 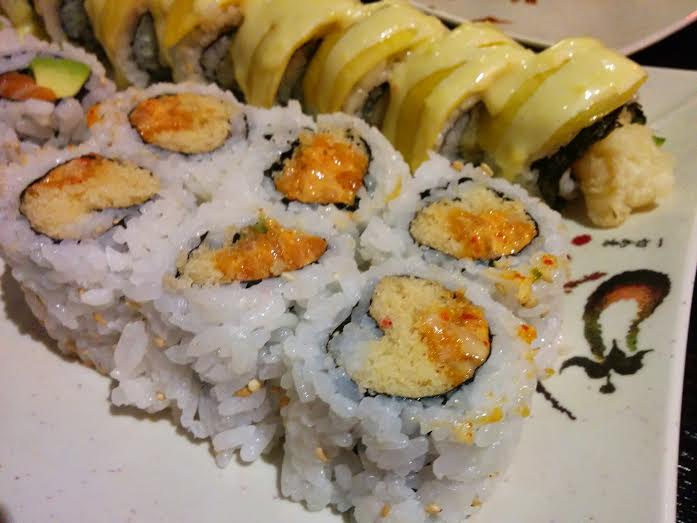 We were hard pressed to locate ANY fish in the Sapporo Roll, which is supposed to include BBQ eel. 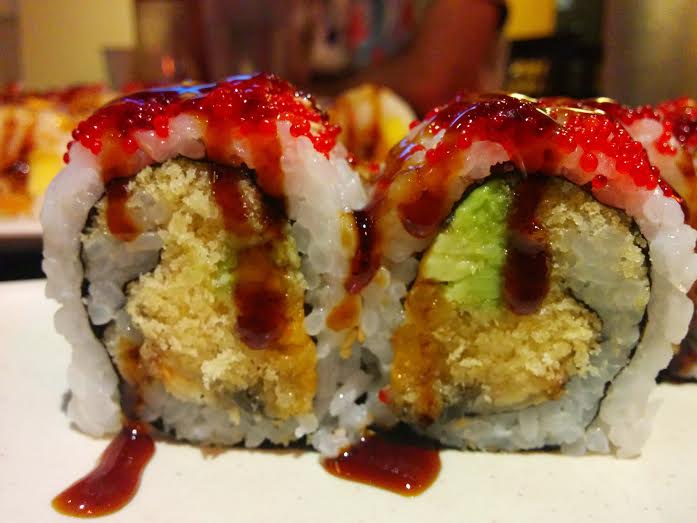 To make matters worse, the so-called “BBQ sauce” on top of the roll tasted like raspberry jam, which impression was furthered by the aesthetic offered by the red fish roe.

I had the distinct impression that I was eating cornflakes and raspberry jam. 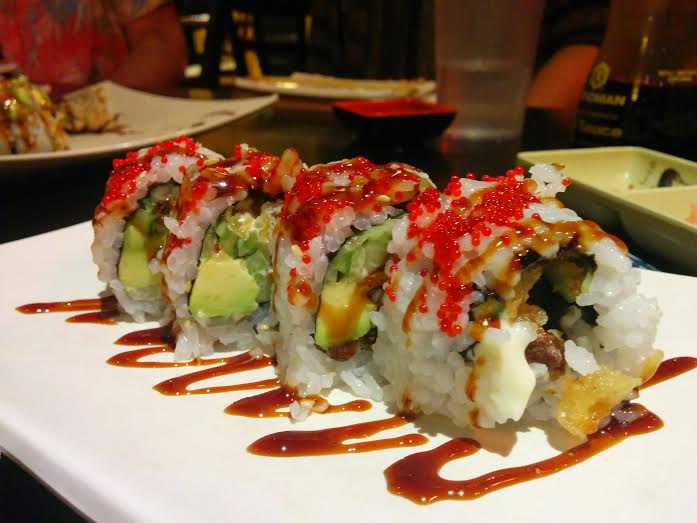 The hand rolls were decent, if a little heavy on the rice. Denton enjoyed a Roasted Beef Wasabi Roll while a couple of us had the California version. 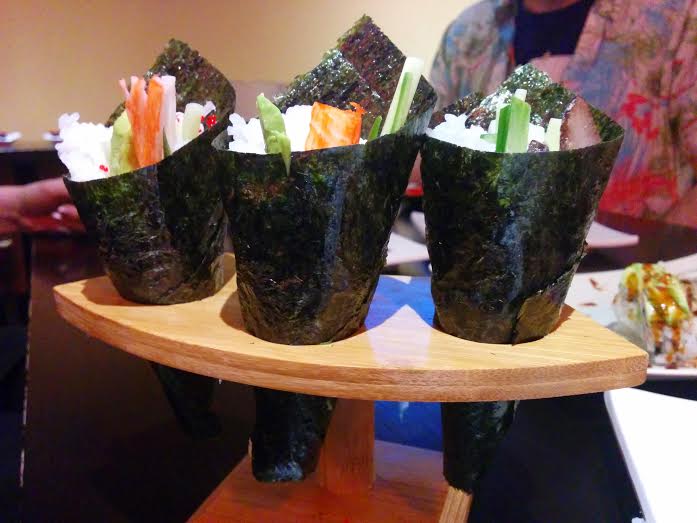 The highlight of the evening was the Crystal Roll, which is a rice paper roll with mango, sweet potato tempura, avocado, tempura flakes and spicy mayo. The picture reveals that it was also draped with the ever-present teriyaki sauce, like so many of the rolls at Genji.

Perhaps due to the fact that this roll is vegetarian, the fillings weren’t so skimpy and overpowered by tempura. 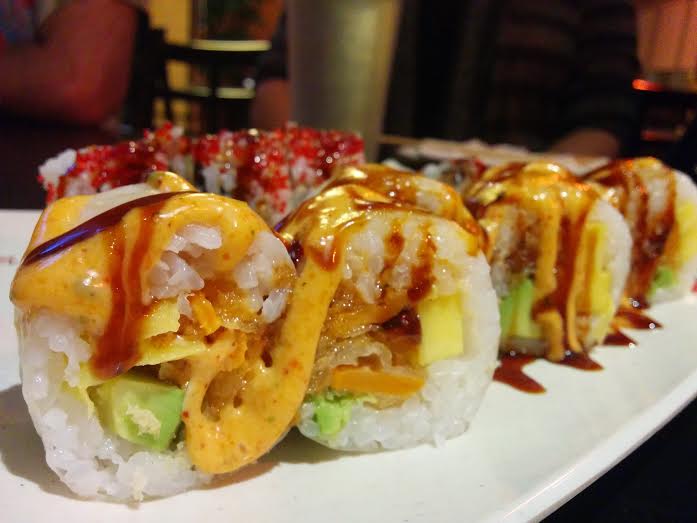 We were disappointed that black sesame ice cream was not on offer, but I enjoyed my scoop of red bean ice cream to end the meal.

The Not-So-Good: monotony of flavour and aesthetics, overuse of tempura flakes and teriyaki sauce, where’s the fish?