It’s Day 62 in the house and Julie is finally wearing a nice outfit. Everyone celebrate this momentous occasion with me. 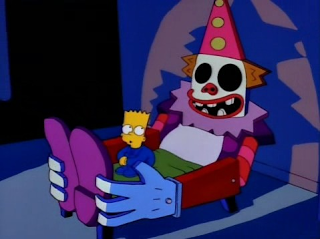 It’s a great fit, awesome colour and it pulls off a nice Mad Men look. I think Jill would agree. (I do! – Jill) It must be a sign that this season is winding down.
Let’s start the show.
Shelly suffers from acute Lawon-arrhea
After the nomination ceremony Shelly decides to spend some quiet time in the purple room. There has always been an old timey fortune teller in that room but today it starts to move. Like Lawon before her, Shelly takes this is a sign that the fortune teller holds a ‘special power’ that could save her. Man, people really do go crazy in the house. She spends three hours examining the contraption asking it questions and constantly touching it. It was like me trying to talk to a man about feelings. I should have given up after ten minutes.
Please keep me, take anything, my ring, my first born, anything…
There are only three people voting for eviction and since Jordan and Rachel are partners it is important to get their vote. So far Jo-chel (not too much of a ring to that) want to eliminate Shelly because she really can’t be trusted.
Shelly feels she can try to convince Rachel to keep her. Shelly does this by offering Rachel her, ‘past, present, and future’ three-diamond ring. Shelly wants Rachel to keep it so in case Rachel leaves the house, the ring will go with her. She is proving she will do anything to keep Rachel and the ring. See here is Shelly’s problem, she promises too much but her actions show a different story. I would have been interested to see if Shelly was saying the same things to Porsche and Kalia. Next, I thought she would offer her clothes or something.
In the diary room Shelly reveals that her ring, which is already tacky looking, is a fake. In the case Shelly actually gave-up her first born I would love if in the diary room she reveals, “I actually don’t have a daughter, just a small Shetland pony wearing a beret.”
Later, Jordan and Rachel discuss the possibility of evicting Adam. If they keep Shelly then they are keeping a target in the house. Jordan raises a point that Adam can’t be trusted as well. It’s true Adam can’t be trusted, but not because he is sneaky and manipulative – because he is moron and goes wherever the power of the house has shifted to. He is such a non-entity on this show.
Later Jordan asks Shelly, how many challenges she has thrown? Shelly admits she only threw the banana competition. Oh really, Shelly? Big Brother editors, drop me a clip, yeah that’s right, she didn’t try during the Zing Bot Veto. What up?
So will Jordan and Rachel keep Shelly?
Julie Time
It’s Julie time. First she asks Jordan what Rachel is like as a partner. Jordan, who I now believe should be in public relations, says that Jordan is entertaining and a never boring. In other words Rachel is dramatic. Rachel tries to prompt her to say something nice but Jordan doesn’t budge. Then Shelly reiterates that she had to make a big move, blah, blah. Julie asks Adam what it’s like being the only man in the house. He attempts to make a joke about being the “sexiest” man in the house and the other women just look uncomfortable. 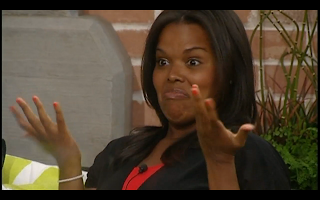 Sequester House – Karma for Everyone
We join Brendon at the sequester house where learn he likes doing things by himself, like workout, make orange juice or playing ping pong. But he feels it is time to make a new friend, who is Danielle. They seem pretty buddy-buddy. I wonder how much these people actually hate or like each other outside the house.
The two realize there will be a second housemate coming. Danielle hopes it will be Adam because he doesn’t do anything. I agree. Surprise, it’s Jeff in a tight black t-shirt. All laugh, realizing they should have stuck with this original alliance or they wouldn’t be here. The laughs were forced.
All three losers, I mean jury members, watch Jeff’s demise. Jeff sees something that I didn’t notice last week. He accidentally threw his clown shoe outside his ball pit. He is so embarrassed that he did that. He feels that mistake will haunt him forever and for a sometime he can’t stop talking about it. It’s almost borderline obsessive. He says he will hate clowns even more than he already does. Did he used to sleep in a bed like this?

While watching these clips, Danielle is happy to know her alliance did everything she wanted when she wasn’t there. Brendon thinks she should be a hypnotist. I think she could be a cult leader.
Only you two are the most important thing to me
Shelly targets her speech to only Rachel and Jordan and asks them to forgive her and please trust her again. It was almost the same speech Jeff gave Shelly before he was evicted. See Shelly, now you know how it feels.
I love the look on Kalia’s face. It was rude to not recognize that Kalia also has a vote. Kalia eventually votes for Shelly to stay, but I wouldn’t have after that speech.

Adam says he originally had a heavy metal speech that talked about wizards and dragons but he will keep it brief, because god forbid he do something memorable.
Goodbye Shelly, and take your fake ring with ya!
During Shelly’s interview with Julie she repeats a lot of the same old things. She feels bad about splitting up Jeff and Jordan but felt like it was the best move. She isn’t a bad person, blah, blah. Julie brings up the fact that Shelly lies a lot on the show but she punishes her daughter for doing it. Shelly agrees she has to write a lot of lines for her daughter when she gets home. My parents’ biggest punishment for me was no TV. That explains a lot about me.
The goodbye speeches are mostly nice. Both Porsche and Kalia appreciated Shelly being the mom of the house. Jordan’s goodbye message showed she was still hurt and Rachel, as usual, screamed into camera that she is smarter that Shelly. Rachel claims she knew that Shelly’s ring was a fake, and Rachel should be an expert in fakeness.
We could have had it all / rolling in the dough – HOH Competition #9
The backyard looks like a bakery shop with a lot of donuts. Similar to Homer Simpson’s dream. Today’s challenge is an obstacle race. The housemates have to crawl into a giant pit of sticky stuff (which I pray is just corn syrup) under a large rolling pin, grab a donut and run back. Oh and on the way they also go through a pit of packing peanuts or sprinkles. The housemates have 13 minutes to gather the most donuts.
Within a couple of minutes Rachel is in the lead and I can only assume will win unless she just gives up or something. Before we go to commercial Julie says there are 12 minutes left in the competition, but my clock says the show will end in eight minutes. They should have made the competition end by the time the show ends. It’s annoying to wait a few days to see something that finishes in four minutes.
So does Rachel win HOH? How will Jeff and Shelly’s meeting be? And ooooh a celebrity guest?
Other Thoughts