Last night I watched an episode of Happy Endings and laughed so much I thought, “Why don’t enough people know about this show?” So here I am giving this show my highest of recommendations. 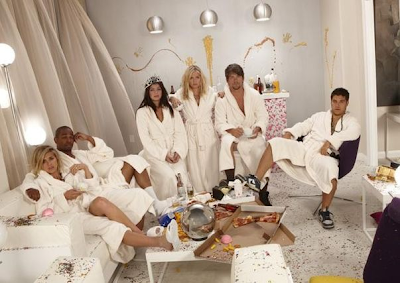 The show started late last spring and is now starting it’s second season. I can’t recall why I started watching the show. Maybe it’s because I always like to support former Canadian child stars (Elisha Cuthbert) maybe it’s because I love Damon Wayans and therefore love his offspring (Damon Wayans Jr.) or maybe it’s because I have a lot of time on my hands. DING!
Here is a crash course of the show:
Happy Endings opens with Alex walking out of her wedding to Dave and their friends are caught in the middle. Can they all still hang out after this? (See how the title Happy Endings comes in?) Beyond this plot this show is about a group of six friends (yes, I know, the plot of many shows) living in Chicago. Sometimes Alex and Dave show how awkward it can be to stay friends after you break-up but overall it’s about the six of the friends hanging out.
Here’s a breakdown of all the characters:
Alex (Elisha Cuthbert)
Alex was with Dave for years but at the wedding realized (with the help of a man on rollerblades) that they shouldn’t be together and left him at the altar. Literally, she ran. Alex is shown trying to learn to be independent without Dave. Her character also has a habit of not thinking things through and let me tell you, comedy ensues. I am impressed with Elisha Cuthbert’s comedic abilities on the show. For a girl who spent seasons on 24 being kidnapped and running away from cougars, she is showing range.
Funniest moment: In “The Girl with the Dave Tattoo”, she sings the most adorable song about dusting. I now catch myself singing similar songs while cleaning.
Dave (Zachary Knighton)
Dave was left by Alex at the altar and became a YouTube sensation because of it. You may think that Alex is evil, but Dave was a careless boyfriend with no ambition. For Valentine’s Day he gave her $20. Dave’s character is shown as immature and lazy but without Alex he is trying to become an adult. For example he takes a big leap of faith by starting his own mobile sandwich shop.
Funniest moment: In “Like Father Like Gun”, Dave plays an epic game of Nerf darts.
Jane (Eliza Coupe)
You may recognize Eliza from her brief stint on that weird Scrubs 2.0 show and she also played the secret service agent who stole Abed’s heart on Community. Jane is Alex’s older sister. I actually didn’t realize this until much later in the show. I would say Jane is the “Monica” archetype. She is a perfectionist to the nth degree and she really works a good, “crazy eye.” She is happily married to Brad and they make an adorable TV couple.
Funniest Moment: Jane takes her self-defence way too seriously in “Of Mice and Jazz-Kwon-do.”
Brad (Damon Wayans Jr.)
Ok, first of all it’s Damon Wayans Jr. We already know he is pretty damn funny. Happy Endings is the reason he is no longer on New Girl and I think he made a good decision because he works so well with this cast. His character, Brad is married to Jane. Because Jane is such a control-freak, Brad seems a little emasculated on the show but it’s always funny. One episode had Damon Wayans Senior play his father. The two of them on screen together was really sweet, especially when wearing matching track suits.
Funniest Moment: In the episode “Blax, Snake, Home” skip to the 2:40 mark and tell me you are not laughing.
Penny (Casey Wilson)
Penny is the perpetually and desperately single girl on the show. Sometimes it’s annoying (the way she says, A-MAH-ZING) but other times I laugh because I can totally sympathize with her. Casey Wilson used to be on SNL and I wasn’t a huge fan of her. It took me a few episodes but I now really like her. But seriously Casey, don’t go back to SNL!
Funniest moment: Penny starts dating a hipster and has to take ‘hipster training’ to keep him around in “Dave of the Dead.” In the future this will make the show so dated but for anyone who doesn’t like or get hipsters, this is amazing.
Max (Adam Pally)
Max is a slacker, serial dater, loves video games and sports and is overly prepared for the zombie apocalypse. Oh, did I mention he’s gay? That’s right. This is the first time (well to me) a gay male character is portrayed as a bro. All the usual television gay stereotypes are not here. The fact that Max is gay isn’t always a focus on the show. But there was an episode when he finally came out to his parents, which I felt was funny yet realistic. Overall, Max is the funniest one out of the gang.
Funniest moment: Just watch the episode, “You’ve Got Male” and get back to me.
Two more things to note:
1) Anthony and Joe Russo direct a lot of the episodes. What have they directed before, you may ask? I don’t know, how about Arrested Development and Community? Come on, that’s a pretty good endorsement.
2) Since Brad is married and Max is gay, this show is going to avoid the pitfall of many ‘young attractive ensemble cast show.’ There will be no extra hooking up in the group. Remember when Rachel and Joey hooked up on Friends? Annoying. Or when Robyn and Barney started dating, on How I Met Your Mother? OVER IT! Those shows slowly die a little when that happens.
Thanks for your time!

Note from Jill: OK, that’s it, Allison’s inspired me – I’m going to try and check out this show!