Oh, little Anna, you are so petite and adorable. I am hoping good things for this episode. Here’s Anna’s appeal: No, she hasn’t been in the best films but I find she really pulls it together. The House Bunny is a good example of that. Yeah, the movie wasn’t that great, but Anna is just so funny. Remember when she kept using that scary voice to remember people’s names?

She is the poster child for the “dumb-blonde” act and for me it always comes off endearing and not annoying. I love that she is married to Chris Pratt, you know him, he plays the very clueless Andy on Parks and Recreation. I hope they don’t act like that at home because it seems a lot of fires would start in that house.
So let’s start the show.
Bloomberg Address
Fred Armisen plays a pretty forlorn sounding Bloomberg discussing Occupy Wall Street. Now I don’t understand Occupy Wall Street fully, so I will try not to judge it. But if someone ends up getting in the way of me trying to get a coffee, that’s where I draw the line. For an opening sketch where it’s just an actor I felt the writing was pretty funny. I agree with the fictional Bloomberg. People should just sit outside really rich people’s houses. Let them deal with it. The best line of this was, “The second I see someone light a cigarette, I’m coming in.” You go, anti-smoking mayor.
Monolouge
Anna Faris does some Q&A’s with the audience and everyone keeps asking some pretty tough questions. Things get pretty tough for Anna but she makes a new friend Hannah Garris (Abbie Elliot) a girl who looks and acts just like her. Abbie’s impression of Anna is a little redundant but I appreciate Anna showing she can go with a joke.
Mauel Ortiz
Manuel Ortiz the most dramatic and salsa fueled talk show ever. Tonight’s episode they catch a husband cheating on hidden camera. This skit was going bad until Bobbi showed up dressed like a woman. A woman wearing a scrunchie.
“What’s Wrong with Tanya?” *Must Watch*
I loved this! What if you took all the common themes to those Lifetime Movies of the week and made it a game show? (To Canadians think those really crappy movies you may see on the Women’s Network.) The contestants are all suburban moms with short blonde hair who all live in a happy suburban neighbourhood where, nothing bad could ever happen to them. The three moms are introduced to a girl named Tanya and have to guess what is wrong with her. There are endless answers to what is wrong with Tanya, does she have an eating disorder? Is her boyfriend abusive? Has she started drugs? “Tanya, Tanya please tell me what’s wrong. I’m your mother.” The best line of the show was what was wrong with male Tonya. “Tonya! You’re English teacher caught you cheating so he made you take naked pictures and now their online and it made you have an eating disorder and also you can’t read.” If you get these movies and how overly dramatic they are then just watch this.
Digitial Short – Interview with Drake *Must Watch*
Andy interviews musical guest Drake eight different ways. My favorite part was the word from their sponsor. Very funny and just Andy being cute as always.
J-Pop American Fun Time Show
Watching this skit I was just shocked. I could hardly make any notes. Are there really people out there pretending to be Japanese? I think this skit was a reminder of how NOT diverse this cast is. That’s all I can say.
Wyndemere *Must Watch*
I think we found a new recurring character for Paul Brittan. A girl introduces her father to a new boyfriend Cecil Wyndemere. Cecil seems to have been transported from the baroque era, a time where men were described as young scamps and fancy boys. He love sweets, keeping secrets and comes with a creepy foot man who plays a harpsichord.  For some reason the father, played by Jason Sudekis, finds Cecil charming and constantly yells at his son. “Steve! Get off your butt and get the little guy some sweets!” Funny. Again watching this sketch I was thinking how adorable Paul Brittan is. And again, I am thinking this while he is wearing a ridiculous costume and acting so… how shall I say it…. Fanciful?
Bookstore
Two girls (Anna and Kristen) come to a bookstore to see the “hot” Ferrari guys. NEXT!
Another GOP Debate
There are too many GOP debates and SNL decided there will be one more on Marriot Hotel TV. The only funny part of this sketch was where they placed all the candidates. Rick Santorum was sent to a gay bar while Ron Paul was sent to a vacant parking lot. Please note I am not sure how Rick Santorum is spelled but after hearing what might happen if I Google search his name, I think you all can forgive me for the spelling error.
Weekend Update
Correspondent #1 – Anthony Crispino came by again to tell of the second-hand news he heard. I heart this character because as you all know I love Bobbi. Best second-hand news he heard. “Courtney Cox was finally released from that Olive Garden.” Oh Anthony.
Correspondent(s) #2 – Drake and Jay Pharaoh came by as, “two teenagers dressed like werewolves.” Huh? Oh Drake seeing your acting chops reminds me of the old days when my dorm mates and I would watch you as Jimmy on Degrassi. Especially that fateful episode where Jimmy was shot and ended up in a wheel chair. Oh God, these memories are too sad. Sniff, sniff. Anyhow, Drake is talented guy but this skit and rap was not good. I wish they gave him something else to do. But the digital short he did made up for it.
Best joke on update: Did you hear about that woman who ran a marathon than gave birth to a baby. Just look at the image. 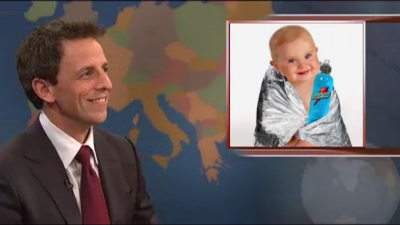 The material tonight was not strong enough for Anna. I have to remind myself that this is the staff’s fourth consecutive show. You can’t blame them that some of the skits were not top form. Maybe after a nice little break the show will be back.
OK, confession time. I didn’t actually watch the show live. I was at an amazing party for a friend of mine who got a great job at Google. So the skits I am writing may be out of order.
Also I decided to do a tribute to the many creepy faces of Bill Hader…. 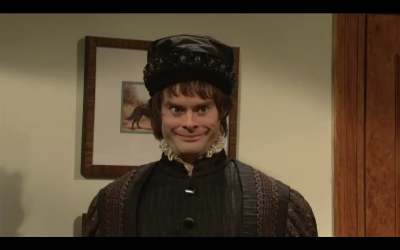 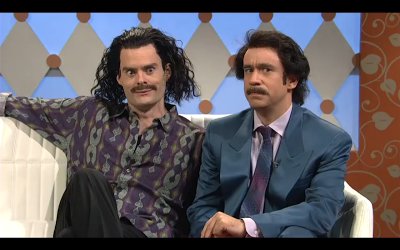 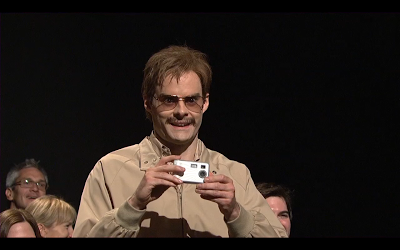