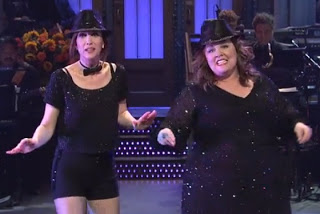 Fresh off her Emmy win, Melissa McCarthy is this week’s host of SNL. The show she won for, Mike and Molly is really funny (trust me on this) but as many of you saw last spring she was amazing in Bridesmaids. The scene where her character has all the puppies in her van is amazeballs. I still can not believe one of my roommates slept through the whole movie. Last week’s SNL episode was so-so but I think maybe the writers and actors have gotten rid of their summer break haze and are ready to go full throttle.
Opening Skit – Lawrence Welk Show
For some reason my mom loves these sketches, especially the baby hands. The sisters from the Finger Lakes sing about the beginning of fall. As usual Judy and her creepy baby hands shows up but Melissa McCarthy also shows up as another “special” sister. This sister’s special talent are teeth so large she can chew threw a tree. It’s predictable, but funny. And seriously, “Is the finger lake near a nuclear power plant?” 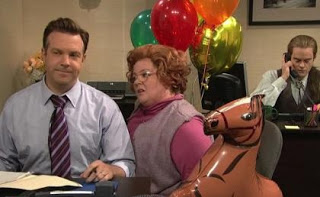 Monologue *Must Watch*
Melissa reveals her real passion is dance, so her good buddy Kristen Wiig shows up to help her pull off some Bob Fosse moves. It takes a few attempts but she finally shows the audience her dance skills behind a silhouette that mysteriously makes her much slimmer. I wish Kristen and I were best friends so we can go downtown and show off those amazing moves. Oh and Bobbi and Taran got some amazing moves.
Commercial – Lil’ Poundcake *Must Watch*
There is a controversy about giving young girls the HPV vaccine because some argue it will encourage girls to start being sexually active. Well Michelle Bachman, here’s your solution and she’s called, Lil’ Poundcake. 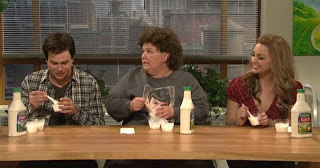 Arlene
A minute into this skit and I’m thinking Melissa should be a cast member of the show. I don’t even think there was a script to this skit I think the writers did the following:
Melissa McCarthy + hilarious red wig + sexual harassment + tiny horse balloon + dry humping said balloon= This skit.
During Melissa’s monologue she told her kids to go to sleep now because she was going to be very inappropriate and she wasn’t kidding.
Digital Short
I hope the Lonely Island Boys have something else planed for the rest of the season because this was very disappointing. I am only left with two comments. Yes, the last line of the skit was funny AND was that Britney Snow in the mix of that show down?
Commenters Talk Show
The writers must be having beef with internet commenters. (Or reviewers like myself.) It’s true there are a lot of anonymous commenters who make crude and mean comments. And yes most of the time these people are sad. (Or people like me, very sad.) This skit was flat but the only redeemable part of the skit was Bill Hader’s entrance. I love the New Jersey sounding “Oh!” he gives with each punch.
Chris Rock in Rock’s Way
You have to admit that this Jay Pharoh kid is good with impressions. And his Chris Rock is uncanny. This skit was clever but I wasn’t laughing out loud. I did enjoy the reaction of the children in the skit.
Weekend Update
Come on Seth, I know you got it in you. Maybe next week. When I watch the “Gaddafi’s friends” skit it causes me to examine how I talk about people. I think they should take these characters and make them friends of other famous political figures. Tyler Perry played by Kenan Thompson also stops by. I am not amazed by this skit but hearing how much money Tyler Perry has. Dayum! But I may see his new movie, “Child, why you got to bother me when my feet are so weary?”
Hidden Valley Ranch Dressing
Again this skit seems like mostly improv. And again Melissa is hilarious! My favourite part was when she tells the woman in the room, “We all hate you, so much.” Do you think that was really ranch dressing she poured all over her face? And here’s another question, will Hidden Valley’s sales go up or down after this skit?
Lulu *Must Watch*
Oh man was this ever funny! Melissa plays Lulu, the poor woman’s Mae West who is extremely clumsy.  My favourite line in the skit was, “No Lulu, let’s do it down here. Put down some towels.”  I loved all the old timey curse words: Cheese and crackers, bananas and cheddar, son of a bee sting. This was the best form of slapstick and Melissa did it to perfection.
“No complaining”
Ever meet a guy who claims he has never had complaints from the ladies? I hope something like this happens to them.
Melissa was amazing! The sign of a great host was that she was the comedic part of every skit. I also noticed she wasn’t reading off the cue cards. With this mile stone Melissa will definitely be getting bigger and better offers. Maybe she will leave that silly Mike and Molly show and spread her wings.
Here’s the order of skits you should watch
1)      Lulu
2)      Monolouge
3)      Lil’ Poundcake
4)      Hidden Valley Ranch Dressing
5)      Arelene
6)      Chris Rock in Rock’s Way
7)      Lawrence Welk
8)      Digital Short
9)      No complaining
10)  Commenter’s Talk Show