Ally: L-A flipped me an email from our FPQT gmail account (which we seriously suck at checking btw) over the weekend. It was like Santa in my inbox.

“This” was taking part in a Team Buy/American Apparel promotion. $25 for $50 worth of AA gold. In exchange for us promoting the event, we would be credited with $50 to spend in-store at the Halifax American Apparel location.

So, I know some of our readers have mixed feelings on American Apparel. It’s not like the store has tried to steer clear of controversy. I’ve never claimed to be the best social activist, which probably makes me a bad person. Frankly, the store just has too many amazing basics that I need to store in my closet. The leggings, the classic white t-shirt, the awesome underwear (don’t make me say panty…I refuse). Point is, I flat-out frequent this store all the time and I’m not ashamed.

I met L-A at noon on Monday to check out the goods. We took a few photos. I know, I don’t know why Tyra hasn’t called me either. 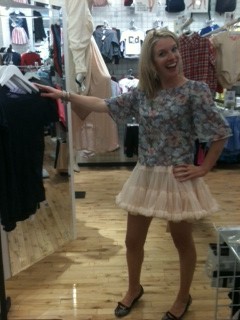 “Why yes, I will be leading your branding strategy!”

L-A and I thought it would be all kinds of awesome if I actually walked into a meeting like this. It would be totally hilarious until I lost the account. Obviously, I had to try on the tutu-skirt. Obviously.

I, sadly, did not purchase the multi-layered, reversable, petticoat skirt ($82) and puffed sleeved blouse ($50). I instead was brainwashed by L-A into buying nautical themed apparel. 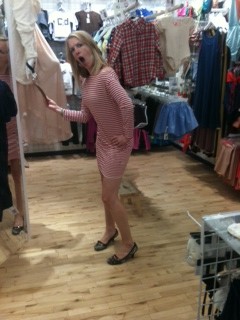 Another pose inspired by “Ladies of the Evening”

The nautical, “pocket frock” for $44!  To be paired with my shiny, black, liquid leggings that I purchased at AA last year.

I’ll let L-A tell you what she purchased. Be prepared to be shocked.

L-A: I totally purchased this: 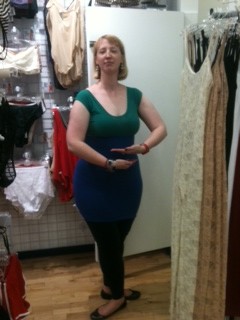 This is LITERALLY the worst photo of me. Ever. (And yes, I’m shocked I’m sharing it with you).

Kidding.  I came out of the dressing room and Ally’s all, “You look like you’re going to a dance recital.” You can probably tell from my lame ass ballet pose that I’ve never been to a recital in my life. Anyway, the dress really didn’t do much for me, no matter how cute it was on the hanger. And the dress Ally bought? I would have gotten the same, except one size fits all is a bit of a misnomer, since there ain’t no one size that’s going to fit both Ally and me.  But that’s okay! Because despite the things I’ve said previously about AA, I was all over this shirt from the men’s section: 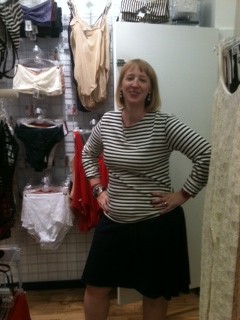 I know. You’re shocked by my choice. (Also – I am posing in front of the granny panties!)

Okay, not with that skirt. The skirt really wasn’t doing anything for me (I’m pretty sure my body type is the opposite of a lot of AA clothing) But it was either that or leggings. And while I am warming to the idea of leggings (I was actually wearing leggings to work on Monday), I will never wear them as pants. Not even to try a shirt on.

This latest nautical stripe is probably my 17th like this. But I needed winter stripes and this is a heavier knit. And when you wear stripes as much as I do (and spill coffee on them as much as I do) – you need to be replacing them on a regular basis. So, totally legit reasons to buy more nautical and I will fight you if you say otherwise (that goes for you too Mr. Husband).

I’m actually going to go back for more AA. Because fall is here and I need more coloured tights.