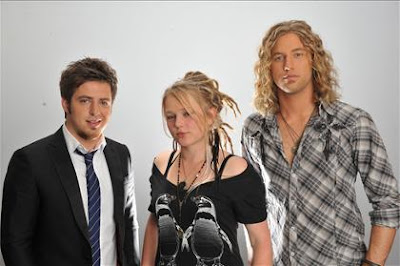 Oh come on, like you couldn’t have predicted it? I like Casey a lot, but for the past four or five weeks you could have safely bet the farm that we’d be seeing a Lee and Crystal finale. Even still, American Idol likes to spend an hour trying to pretend like that isn’t the case.
It was obvious from the beginning. As Ryan talked to the final three contestants about the stresses of being on American Idol and how much they want to win there was definitely more focus on Crystal and Lee than there was on Casey. It’s an interesting final three – I like them all, they all belong in some aspect of rock music, they all play instruments and they’re all very talented. For a drab, boring season I’m really happy with how it’s turned out.

During the results show we got to see more of the final three’s home visits, because we barely saw anything during the performance show on Tuesday night. In fact we didn’t even see Lee in Chicago, we only saw him on the plane!

First Casey visited his hometown of Cool, Texas. If I had to be from Texas, I would want to be from a place called “Cool”. And it suits Casey well, because that’s what he is – he’s not the most talented of the final three, but he’s very cool. I loved Casey’s exclamation of “Holy ‘BEEP with the Idol logo covering his mouth'” once he got in the cab after seeing all the support he had. It was also really touching when he went to the hospital to visit everyone who had helped him after his accident.

Next we all had to sit through a performance by an artist that Perez Hilton discovered. I’m not a huge fan of Perez, and I wasn’t expecting much from this kid’s performance. Which is good, because it was kind of atrocious. The outfits? The dancing? The lame split screen shots? All ridiculous. And the singing wasn’t great either. And that’s saying something, since he looked like he was lip-syncing.

Next we saw Crystal visit Ohio. I loved when she signed some guy’s chest and said “You better bathe,” and he replied with “Oh this is getting tattooed sweetie.” Man is he going to regret that in 20 years if her career doesn’t pan out after the show. I loved that they called Crystal’s concert “Bowerstock”. It was also really sweet that they used one of Crystal’s original songs during the piece.

Finally we saw Lee’s hometown visit to Chicago. I liked when Lee went to visit his old elementary school and one kid in the crowd was plugging his ears with his head down until he realized the camera was on him, and then he started cheering with everyone else. Was it just me or did it seem like a lot more kids were excited about Lee than anyone else. “Oh my gosh, holy cow!” squealed one wholesome girl. Finally Lee played for all his fans, declaring “This is the best day of my life.”
I never want to get hooked in by these hometown visits, but they always get me. I’m not that emotional of a person, but watching people realize they’re achieving their dreams always gets me.

Before we could get to the results we had to listen to a performance by…Justin Bieber! I really, really can’t stand that kid. Does anyone actually like the sound of his voice? And who were those grown women in the front of the audience who knew all the words to his song? He sounds like a girl! It’s just like when Hanson came out when I was a teenager and the first time I heard MmmBop I asked my sister “Who’s this? I like her!”.

Finally, it was results time and Casey James was sent home. 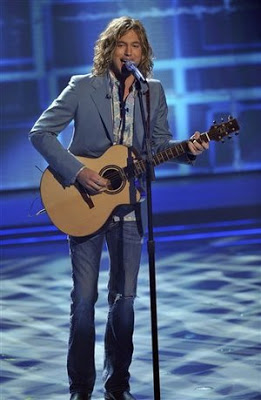 Lee and Crystal definitely deserve to be in the finals, but Casey was a favorite of mine. And he did pretty well for a guy who only made it to Hollywood because Victoria Beckham and Kara liked how he looked with his shirt off. I hope he makes some cool music after the show. His final performance was really good – who was that little girl he picked up? Did he know her? She looked kind of scared. But that could have been because she was wearing a monstrous bow on her head. I wouldn’t be happy if all of America saw me dressed like that either.

Are you excited to see Lee and Crystal battle it out next week? Who do you think will win?

American Idol: And the final two is...
https://haligonia.ca/american-idol-and-the-final-two-is-18234/