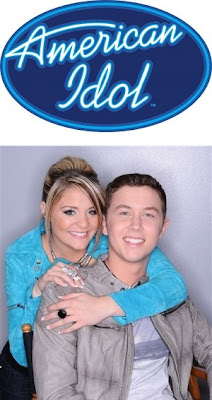 About half an hour before American Idol was to air on Tuesday night, I saw the news on Twitter that Lauren Alaina had lost her voice and might not be able to perform and I thought “Well, there’s no good possible outcome here.” If Lauren didn’t perform, I would feel terrible for her. She’s a kid, she was clearly living her dream on American Idol, and not being able to perform in the finale would be a terrible let-down for her. And even though she’d be replaced with Haley, who I love, that news wouldn’t be so hot for Haley either. Perfecting three songs on a moment’s notice wouldn’t be easy, and she wouldn’t have the audience’s support. It wouldn’t be a fair fight. And I worried that if Lauren did perform that she wouldn’t be able to give it her best shot, and that also sucks. Scotty already had an advantage going into this, and the news that Lauren was sick increased it exponentially.

When Ryan stepped out, introduced Lauren and Scotty, and Lauren told the world “Don’t worry about it.” But that wasn’t enough, so Ryan trotted out a real doctor – he was in scrubs and everything! – to tell us that Lauren had been drugged up nice and good and would be able to sing. And with that, let’s get to the songs.

Round One: Favorite Songs of the Season

Scotty McCreery – Gone
Really, Scotty? We JUST heard that song. Also, I hate it. His vocals were actually tolerable, but his facial expressions were more atrocious than usual.

Lauren Alaina – Flat on the Floor
I was surprised Lauren chose this song as her favorite, since I didn’t think it was her strongest this season. It is a fun song, though, and she sang it with a lot more confidence and attitude than the last time. Her voice sounded great until she had to belt it, and then I thought she sounded a bit hoarse.

It was weird that the performances weren’t judged. Obviously, I’m going to say Lauren won every round since I am strictly in an anti-Scotty camp, despite her blown vocal chord.

Round Two: Picks from George Strait and Carrie Underwood

Scotty McCreery – Check Yes Or No
Boooooring. Everything Scotty sings sounds exactly the same and I fell asleep during the performance.

Lauren Alaina – Maybe It Was Memphis
Here’s the problem with an all-country finale – it’s a lot of songs I don’t know. I was hoping Carrie Underwood would choose a Taylor Swift song for Lauren, or something by Dolly Parton, or even something – gasp! – from a genre other than country. This song just didn’t so anything for me.

After both kids had performed their second songs, we finally got some commentary from the judges. Was the lack of critique in the finale a subtle commentary on how useless the judges’ critiques have been all season? It was, right? For gods sake, Steven Tyler gave both rounds to Lauren for being prettier and Randy said they were both “in it to win it”. Well I would sure hope so! They are in the finals, after all.

Scotty McCreery – I Love You This Big
Is this a song or a Robert Munch book? Anyway, the song was a great representation of everything I hate about Scotty. The arm acrobatics to match “this big”, the stupid twangy scooping on every third note, the facial expressions. Barf.

Lauren Alaina – Like My Mother Does
This was a perfect song for Lauren, since we’ve seen her lookalike mama in the audience throughout this whole thing. Lauren looked and sounded beautiful. When she went and hugged her mother in the audience and sang to her, my allergies may have acted up a bit.

As you can probably tell, I am all kinds of rooting for Lauren to win this thing. She’s so talented and young, and I think she has a ton of potential. I think she is adorable and marketable and deserves to win. And the kid really, really wants it. The look on her face when the judges praised her final performance? Priceless. That said, I was surprised when all three judges gave the edge to my girl. I thought they were bigger Scotty fans.

Well, we’ll find out who wins it all tomorrow night. Who are you rooting for?