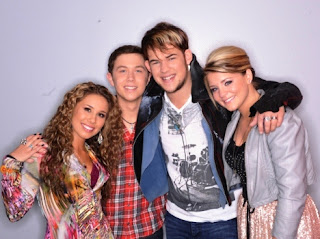 I had mixed feelings about the theme for this episode of American Idol. On the one hand, having the contestants mentored by Lady Gaga, who is arguably the most popular and most creative musical artist on the scene right now, was a great idea. These are people who are supposed to be trying to fit into the musical landscape, so it was good to have them mentored by someone who is currently defining that landscape. In fact, I would have liked to see each of the four artists attempt a Lady Gaga song.

Instead, we were subjected to the ubiquitous “inspirational songs” theme, and then songs from the catalog of Leiber and Stoller. Don’t get me wrong, the songs are good. But they’re not very relevant. This is part of why a show like The Voice could end up having an edge of American Idol. Overall, it made for a weird mix of performances. Anyway, let’s get to the performances.

James Durbin – Don’t Stop Believin’
This was James’s inspirational song because he’s been really touched by music from the cast of Glee. Right? That’s not what he said? Oh. Because in my head, he said “I really liked the Regionals remix, where you got to hear more people sing than just Rachel and Finn, you know?” Anyway, James was good – although, did he sound kind of off? The song is just so overdone, though, and he didn’t bring anything new to it. It was cheesy.

Haley Reinhart – Earth Song
It’s hard coming off a week with two incredibly strong performances, and I don’t think this song suited Haley as well as some of her past choices have. It was fine, but it was no “Bennie and the Jets”, “You and I” or “House of the Rising Sun”. I thought she came into her own when the choir came out though, and I think Haley has grown exponentially as an artist since the competition began. What I don’t understand is why the judges seem to be SO much harder on Haley than they have on other people. If Lauren Alaina stretches herself, the judges applaud. If James or Jacob hit multiple wrong notes in a performance, the judges ignored it. Haley seems to be criticized more than anyone else in the competition, and she’s one of the best vocalists.

Scotty McCreery – Where Were You When The World Stopped Turning
At what point do I just say “Screw it, I’m fast forwarding through this crap”? This week? As it turns out, yes. This was the week. I am just not cut out to listen to a guy drawl out the words “Cause I know Jesus and I talk to God.” I get enough of that from Survivor. Go ahead and send your hate mail! Naturally, the judges ate it up and possibly tried to connect it to the killing of Osama Bin Laden. Of. Course.

Lauren Alaina – Anyway
Here’s the difference between Scotty and Lauren – Scotty sings cheesy, schmoozy country songs with a look on his face that oozes “I am trying SO hard to be charming right now”. Lauren genuinely chooses a song that means something to her, and she talks about what’s happened in her hometown without coming across as pandering or insincere. This is why I don’t fast forward through Lauren’s performances. Well, that and I like the sound of her voice. This performance, I feel, was one of her best. All that stuff the judges have been telling her about hitting bigger notes? She finally did it.

Unrankable: Scotty McCreery, since I now find him unbearable and fast forwarded through his performance.

I love how weird Lady Gaga looked as she mentored the kids. That is one kooky lady, and if you admire nothing else about her you should admire her commitment.

Haley Reinhart – I Who Have Nothing
Gaga was incredibly impressed with Haley’s singing, and I liked that she helped Haley amp up the drama. Haley looked stunning for this performance, and she brought great drama and attitude to it. And the vocals? Killer. Absolutely. Killer. I would have had a cow if the judges had criticized her, but they actually gave her a standing ovation.

Scotty McCreery – Young Blood
Gaga found Scotty funny, but I just found him nauseating. Also, kissing the cross? What was that? What was so offensive about the time he spent with her that he felt he needed apologize to the lord? Ugh. What was offensive were Scotty’s dance moves during the performance. Barf. And I hated the low “You better leave my daughter alone.” You’re 12! This performance felt like I was trapped in a karaoke bar, in Oklahoma, in a nightmare, in hell. Cheesy, cheesy, cheesy, gross.

Lauren Alaina – Trouble
Lauren had some issues with the word “evil”, and luckily Gaga helped her get over that. If you can’t own the lyrics, you’ve got a big problem. On stage, Lauren owned her attitude. The sparkly hair, the big hair, the glint in her eye. It was another great performance. I love how Lauren says “thank you” at the end of a performance, or does her little hop – she always seems like she’s having fun, and I like that.

James Durbin – Love Potion #9
This was a super weird song choice, but I really liked what James did with it. It was definitely surprising. I still feel like I could do without so much oversinging/shrieking from James, but I felt that way about Adam Lambert, too. Overall, yeah, it was a good performance.

Obviously I’d like Scotty to go home this week, but I don’t think there’s even a chance of that happening – it’s going to be one of the girls, which is too bad. I really like them both. I think Haley is the better performer, but I really love Lauren too and think she has a lot of potential. I’ll be sad to see either of them go. What did you think of the episode? Who do you think should and will go home?