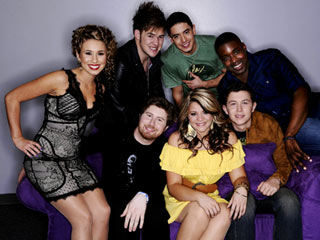 And then there were six. After a pretty decent performance show on Wednesday we had to say goodbye to one singer on American Idol. But not before some surprisingly good group performances.

“Hey Soul Sister” was great, I thought, and achieved what I had thought to now be the impossible – making Jacob Lusk likable. He actually blended in, vocally, with everyone else! He didn’t have to be a showboat and make it all about himself! He was a team player! I thought Haley and Lauren sounded really great on the song in particular.

What really shocked me was Scotty in the performance of “Viva la Vida” he did with Casey and James. Why hasn’t be broken that out before? Now that he’s proved himself capable of singing non-country music I’m mad at him for not showing this range earlier. I know country is his thing, but why pigeonhole yourself when you don’t have to? The performance as a whole was really impressive.

David Cook was good, and his new hair plugs looked very nice. The song was catchy, and I hope it’s successful. I always liked David Cook; I want him to be more famous. Maybe now that his hair isn’t thinning he will be. As for Katy Perry, I love her but the lip synching was too obvious and I don’t like this song as much as her previous hits.

Jacob was the first person sent to the bottom three, and I’m sure he blamed that on the music mess up. Or America not loving their fathers, who knows. Next to join him, predictably, was Stefano. Stefano’s days have been numbered since he made it in to the finals with a wild card, and I’m surprised he’s lasted this long. I was disappointed, though not shocked, that Haley rounded out the bottom three. Luckily, Ryan immediately sent her back to safety. I didn’t really care which of the two gentlemen got eliminated since they’re both fat waiting to be trimmed, but I was rooting more for Jacob to go.

Stefano was eliminated, which wasn’t a shock. I like Stefano, but never really progressed the way I hoped. He made it pretty darn far for a wild card pick, though.

What’d you think of the episode? Did America get the bottom three right? Were you happy with the result?