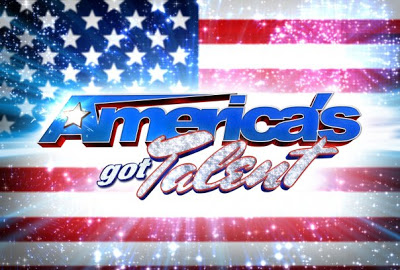 I was excited for America’s Got Talent to hit New York this week, since it’s one of my favorite cities in the world. And New York gave us a lot of talent this week – I’d say it was a pretty solid episode of America’s Got Talent.
The Lights Go Out on Broadway
The first act we saw was a group called Fighting Gravity who did some really cool…dancing? I’m not sure what to call it. Anyway, they moved around whilst wearing glow in the dark suits, which was a lot cooler than it sounds. It was also fun to see the looks of blind panic on the audience members’ faces when Nick Cannon announced they’d be turning all the lights out. Once the lights came on, I realized that only some of the guys were in glow in the dark outfits and the rest were in black, and they’d been helping the guys move around. It was really cool – they were just a group of engineering frat brothers with no dance experience with a dream of having a show in Vegas. I’d go see it. They were really neat.

The father/son duo from New Jersey deserved to be whacked by Tony Soprano just for subjecting the audience to that horrendous rendition of “All By Myself”. I was annoyed at Howie and Sharon for not X-ing them after the first few notes. Just as bad, though, was the guy who described himself as a “speed eater” and tried to scarf down five pizzas in an incredibly short amount of time. Only in America would eating large amounts of food in a short amount of time be considered a talent. Disgusting.

The lady in the pink top who thought she was Barbra Streisand was completely delusional. From her bad boob job to her singing, she was bad.

Big Lights Will Inspire You
I was NOT expecting the guy who looked a bit like Weird Al to come out in kabuki make-up drag. Amazing! Was that even drag? It was sort of in between, it was hard to tell. He went by Prince Poppycock and sang opera. It was pleasantly bizarre, although I’m not sure I could listen to him for longer than a few minutes. But I hate opera. I was more interesting in his make-up and costuming.

We saw a cute & sexy burlesque group, a guy who played four harmonicas at once (because in America, more is always better) and three guys who scared the crap out of me by throwing knives around.

The two guys who made up the group On Repeat did NOT look 20 and 22 years old. No one over 15 has the Justin Bieber haircut. Needless to say, they were awful. After the boys failed to convince the judges that their rapping was worth hearing, we saw a leather clad guy who did a pretty cool fire show. Then we saw a string of bad stand-up comics (save it for Last Comic Standing, y’all!) There was one poor fool who practically got booed off the stage and then was invited to Vegas. I didn’t dig it, but the judges and Nick Cannon did. Did you think he deserved to make it through? What other New York acts were you into?