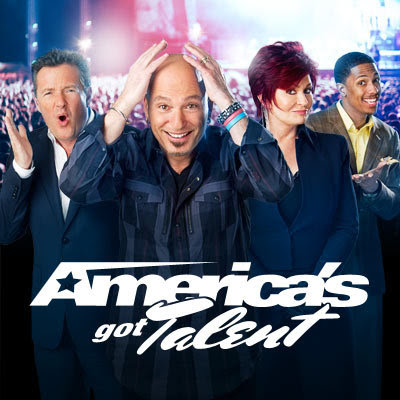 I’ve never watched America’s Got Talent before, but the fact that I like all three judges this season – Piers Morgan, Sharon Osbourne and Howie Mandel – prompted me to give the show a shot. The first thing that struck me, though, was that none of the judges determining whether America has talent or not are American. Pier and Sharon are British and Howie is Canadian. Are Americans incapable of judging their own or something? Not that I’m complaining. I don’t really think David Hasselhoff has the right to judge anyone after that hamburger video. Not publicly, anyway. Anyone can judge from the comfort of their own home – heck, it’s the point of my whole blog!

Along with the judges, Mariah Carey’s squeeze Nick Cannon hosts the show. I don’t know much about Nick other than:
a) He’s married to Mariah Carey and I will always find that weird.
b) I don’t like his show Wild ‘n’ Out and probably never will.
c) He was wearing a blazer that could only have been borrowed from a used car salesman.

The first talent act of the night was an absolutely adorable dance duo called “Future Funk”. They were nine and five years old and had somewhat nauseating nicknames, but they were super cute. I’ve seen kids dance better, but I’m a sucker for a kid with a fro and they were pretty good. Future Funk was through to the next round!

I was rooting for the fancy bartenders, but Howie made a fair point – Piers’ rule was to buzz them if they dropped something, and Howie said he waited to buzz them until they’d dropped seven things. There was way too much smashy-smashy going on! Watching bartenders throw around martini shakers is only fun if no one needs stitches at the end.

The sideshow people wanted to be freaky, and mission accomplished! I loved when Nick Cannon exclaimed “Oh, that was a perfectly good breast!” as one performer stapled a paper heart to herself. I personally did not need to see people shove sharp metal objects through their noses and cheeks, but hey, that’s just me. Piers had it right with “repulsively compelling” – I couldn’t stop watching, but it also killed my appetite.

The dance duo “Ring Masters” were interesting to watch. On the one hand, I dug some of their moves. But on the other hand, the manipulation of their bodies kind of freaked me out. I thought Piers buzzed them too soon, though – I wanted to see more. They were so good that Howie actually touched someone!

I also enjoyed the Bollywood dance troupe, but I hope they use some more music besides “Jai Ho”. There is more to Indian dance and music than Jai Ho, as much as I love the song! The martial arts group was pretty rad too, and I don’t usually go for that sort of thing. Haspop the street performer pretty much blew my mind. I especially liked the bit set to Aqua’s “Barbie Girl” – I loved that song when I was 13!

Well if I’d known “hot” was a talent…

The girl who came out in a latex catwoman costume was hot, and her trick with the painting was a cool party trick but I didn’t think it was America’s Got Talent material. She got three yeses though, so maybe I just didn’t get it. One guy named Hannibal came out dressed in yellow robes and performed the last verse of “Hallelujah”. I though I’d heard that song performed every way possible, but nope – he had a new take on it! As if having the name Hannibal wasn’t creepy enough, he also had a weird demeanor and laugh. I wouldn’t have put him through, but Howie and Sharon yessed him. I also dug the silks dancers and the cute-as-pie teen band that was a throwback to the Beatles.

We met the New Directions Choir (like Glee?), which was made up of formerly homeless ex-military men and women who can sing. I had to wonder, is it difficult for them to find members? That’s quite the niche. They were good, though, and the audience was clearly moved by the performance.

I had high hopes for the singing/dancing/rapping/tumbling duo called No Shade. They had fabulous outfits, bedazzled mics and sharp moves. But their voices were brutal! It was sad to see, since the duo really seemed to think they’d done well. Another miss was the acapella group Noteworthy (trying to) singing a Lady Gaga song – it was like Glee-Goes-Gaga-Goes-Wrong!

Michael Grimm closed out the show with an acoustic rendition of Ray Charles’ “You Don’t Know Me”. He delivered the kind of performance I wish we’d see more on American Idol – fresh, original and heartfelt. And with his modest demeanor and sweet back story, the performance was a great way to end the episode.

America Has Got Talent!

Overall, I was really impressed with my first ever America’s Got Talent episode. It exceeded my expectations. The judges were funny, the talent was cool and the way the show was edited made it move quickly enough that it held my attention. So far, so good – I think I have a summer show on my hands that I can really get into!