Byebye Venice Beach, hello Venice, Italy! After a surprise gondola visit from Tyra, all the girls headed for Italy. Let the squealing begin! All the girls were excited for the trip, especially Ann who said she’d only been outside of Texas a few times, and Jane who studies history at Princeton.
Something that was really nice to see was how Ann has become more social and interacts more with the other girls. Something that was not nice to see was how much Liz whined about a bird pooping on her arm. For real, her ARM. That is not that bad. Unless it gets in your hair or stains a piece of clothing you particularly like, you do not get to whine for more than 3 seconds. And if you’re in Italy when that happens, you only get to whine for 1.5 seconds because you’re in freakin’ Italy. Get a clue!
Gondola Baby, Gondola 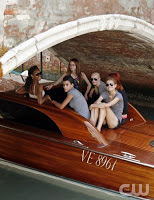 The girls were posing in groups of three on gondolas this week, decked out in period costumes. As soon as Jay mentioned that the girls would have to push through being “super uncomfortable” I wondered how Liz would do. “Stoic” is hardly her middle name. The photoshoot could have been a challenge for Kayla as well, since the girls were supposed to be fawning over a “beautiful, big-nosed Italian man”, as Chris put it.
Group One included Kayla, Chris and Liz. And what do you know, Liz was the first to complain! Kayla rocked it though, and I was super impressed with how she overcame her major obstacle. I was sad to see Chris struggle with the shoot though, since I’ve been rooting for her.
Group Two included Chelsey, Jane and Ann – a bit of a super group, if you ask me. Chelsey seemed to really rock the challenge, and Jane looked fantastic in the period costuming. Ann struggled with her awkwardness, which was a little heartbreaking. She was such a star early on in the competition, but lately she’s really been losing it.
Jay announced that the girls would be leaving Venice for Milan…which Liz took to mean Mulan, like the movie, and she thought they were going to Japan. Mulan was set in China. Stupidity aside, why wasn’t she excited to go to Japan? Liz has a permanent bitchface on, and it’s gotten real old.
A House is not a Home
“It ain’t all that,” Chris said about the girls’ new digs in Milan. Chelsey immediately knew why Tyra had chosen the apartment – because it was the kind of place real models would stay in.
The girls went to Missoni the next morning, which is pretty freakin’ awesome. I’m starting to really root for Chesley because she’s the only girl who seems to actually appreciate the designers and photographers that are involved this season. Margherita Missoni showed up to judge the girls’ walks, and told them she’d be at panel that evening.
The fact that Liz spent the entire episode talking about her kid and how much she wanted to win so their lives would change felt like a great big clue that she was going to be eliminated. That and the fact that she’s a talentless whiner who happened to be blessed with impeccable bone structure.
Hot Child in the City 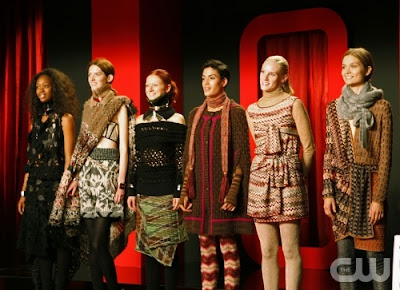 Apparently it was incredibly hot and humid in Italy, so the girls all struggled with wearing the thick fall outfits from Missoni.
Jane, Ann and Chelsey: Their photo was fantastic – Chelsey and Jane looked especially good, and I had a feeling Chelsey would get that first-called photo she’d been dying for. Ann did look a awkward and a bit disconnected from the rest of the shot, but she still looked beautiful. 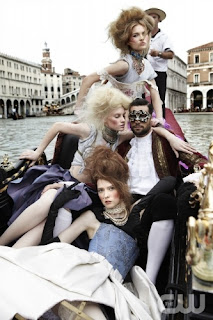 Then, just as Chelsey said “I’m gonna pass out” and looked like she actually would, Liz started to look like she was going to puke as well. Tyra had all the girls sit down, but she seemed generally unconcerned.
Liz, Chris and Kayla: This photo wasn’t as strong as the first, but Chris looked a lot better than I expected. Kayla looked good as well, but Liz looked like a man. And before ALT could even get the words “I didn’t like the stance” out of his mouth she came back with an excuse about how hard it was to stand. That girl has more whine than all of Italy’s vineyards. 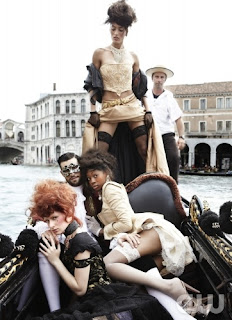 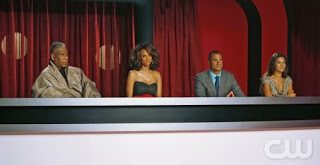 The judges seemed to have some disagreement over who delivered the best shot. Chelsey? Jane? Kayla? I thought Chelsey deserved the best photo of the week, but a lot of the judges raved over Kayla.
Kayla was called first, followed by Jane, Chelsey and Ann. Liz and Chris stepped forward, but it had been obvious all along that Liz would be eliminated. And is anyone really sad about that? Doubtful. She might have said she wanted it, but her whining and moaning suggested she couldn’t handle being a real model. Next week are go-sees and a statue photoshoot – who’s excited?

America's Next Top Model: Be Italian, be Italian, live today as if it may become your last
https://haligonia.ca/americas-next-top-model-be-italian-be-italian-live-today-as-if-it-may-become-your-last-28527/