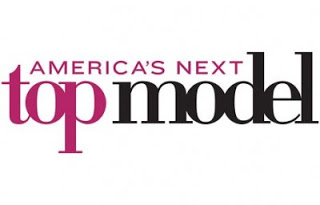 It was makeover week on America’s Next Top Model this week! I was especially excited for these makeovers because I was expecting Tyra to make the girls edgier and more high fashion than usual.
After last week’s photo shoot everyone was feeling pretty intimidated by Awkward Ann, who’d won photo of the week. I’ve got to say, I didn’t think Ann had it in her but if I were the other girls I’d be intimidated too. Then Tyra showed up, wearing suspenders and a newsboy cap. What was that? Had she just come from the dress rehearsal of Oliver Twist? It was all kinds of cute. Tyra told the girls what they had in store for their makeovers, but since she prefers to speak in riddles you really couldn’t really tell what would be done.
Then in one of the funniest pranks I’ve ever seen pulled on ANTM (I actually can’t remember any previous pranks) Lexie made up a fake list of makeovers for all the girls. She even gave herself a bad one so that she could pretend to cry and freak out over it. Then the other girls started freaking out over what they thought they were getting, so it was pretty hilarious. Everyone showed up for makeovers still thinking that the list was true – so perhaps Lexie went a little far, but it was still funny.
Flow it, show it, long as God can grow it
I especially loved seeing Liz show up with her hair in a mohawk. She thought she was getting longer hair, but instead ended up with a pixie cut. She wasn’t thrilled, but I thought she looked great. Chelsey started off her makeover at the dentist getting the gap in her teeth widened – yes, widened – and then she got her hair bleached. I think this girl could be a contender for the finals. Sara’s brown hair was OK, but I HATED her nonexistent eyebrows? Why do they always have to make one girl look like an alien? Why? 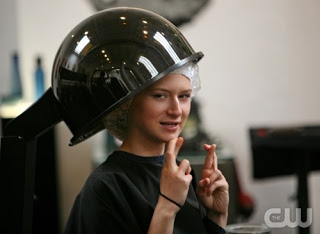 Kendal’s new, sleek long hair was gorgeous. Kayla had a really intense makeover. They replaced her long blonde hair with an orange bowl cut. It was a long bowl cut, but it was a bowl cut. And it was orange. I’m still not sure how I feel. Terra looked almost exactly the same, but her sister Chris looked great with her new long, curly hair. Esther worried that she needed to stay true to her Orthodox Jew roots (but she told Tyra she’d have no problem working on the Sabbath?) but she didn’t really specify what that had to do with her makeover. She looked good, but she didn’t undergo a huge change. Jane’s lighter, longer hair looked very pretty – but was it edgy enough? Rhianna got long, wavy hair that reminded me of my favorite past model Analeigh. Only, you know, not nearly as pretty. And finally they gave Kacey some contacts so she won’t fall off the catwalk. Lexie’s makeover was the worst – her hair was dyed a dull shade of brown that did nothing for her.
After all the girls had been made over (with surprisingly few tears) the J’s dropped the news that one girl would be eliminated on the spot, based on their “After” photo shoots. They sent Terra home. I was sad to see her go, but it wasn’t a huge loss – I never thought she had what it takes to win.
Fallen Angels
For the photo shoot, the girls hit the beach to pose as fallen angels in harnesses. Oh, and they brought men in. Why do the girls always go nuts when male models arrive? They haven’t even been in the house that long!
Esther struggled because her model looked like Jesus and she felt dirty, or something. Kayla struggled because her model was male and she’s a lesbian. Um, have these girls ever her of pretending? What, they never had a bit part in a school play? They’ve never dressed up for Halloween? They’ve never flirted with someone they weren’t into in order to get their way? (OK, maybe not everyone has done that last one…) But for reals, these chicks need to Get. Over. It.
Again, Lexie blew her photo shoot. It was definitely looking like she’d be going home.
Strawberry Fields Forever 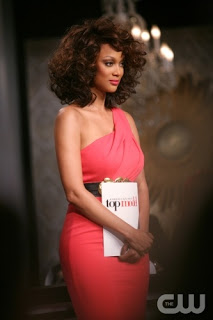 OK, I’ve just gotta say – Tyra is totally rocking the hair this season. I loved those curls. The guest judge this week was Patricia Fields (Sex and the City, lots of other stuff). I’m actually not a huge fan of Patricia Fields, or of a lot of the fashions on Sex and the City, but she’s totally influential and other people love her, so I respect her. Before the judging began, Tyra busted Lexie, Ann and Rhianna for creating the fake list. It was pretty hilarious to see the girls’ reactions.
And now for the photos…
Liz: How great was Liz’s photo? It totally made up for the fact that she was a bit off a bee-yotch over her awesome Halle Berry ‘do.
Chelsey: I really liked Chelsey’s photo. It was sexy, strong and captivating. Again, I think this girl is a frontrunner.
Esther: I did not love Esther’s photo. She reminded me of the little boy from Finding Neverland.
Jane: Apparently Jane didn’t convey the right emotion in her photo, but I thought it was decent. She didn’t have the best photo, but I still think Jane has a lot of potential.
Kacey: Kacey’s posed her body beautifully, but her face was weak. Still, I like this girl. I think it’s her cheekbones.
Lexie: I like Lexie, but that was a terrible photo. The pose was boring, her face was blank. She admitted she was disappointed in herself.
Sarah: Sarah was anything but seductive in her photo. Her pose felt very generic and her face was weak.
Chris: I liked Chris’s photo. Tyra said if she was grading on a curve that Chris’s photo was OK – ouch.
Rhianna: I loved Rhianna’s photo, but until she retired that hat I can’t support her. Wearing quirky hats is cute. Wearing one particular weird hat all the time is like someone invited her grandmother to ANTM.
Kendall: Kendell looked AH-mazing at the judging. Her photo, though, was just average.
Kayla: Too many “K” names. Kayla’s photo was good. What I liked about it was that it didn’t remind me of the other photos.
Ann: Ann’s photo was great again. It was so elegant, and in person she is definitely not elegant. Where is she getting it from?
The judges weren’t impressed with the photos, and I could understand why. The poses seemed average and uninspired, and very few girls stood out. But who was the worst? I thought Lexie and Sarah’s photos were weakest.
Twelve mediocre girls stand before me…but I only have eleven boring photos in my hands 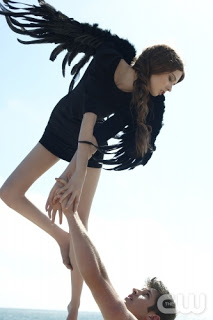 To rub in the fact that she was disappointed with the results, Tyra decided to select a small group of girls that weren’t dreck-ful, or something. Kayla, Chelsey, Chris and Ann were called forward. They were told they did very well, and once again Ann won best photo.
Rhianna was called next, then Liz, Jane, Kacey, Kendall and Esther – so Lexie and Sarah were in the bottom two. Can I call it, or what? Honestly, did it matter who went home? I personally prefer Lexie, but neither girl has what it takes to win. And Lexie was given the second chance while Sarah was eliminated. Seriously, when am I getting my invitation to sit on the ANTM judging panel?
It was sad to see Sarah express how guilty she felt about leaving her son for something that she didn’t even win. But you know, them’s the breaks. Did you think Sarah deserved to go home? What did you think of the makeovers? And are you, like me, wondering if this new, gorgeous Tyra Banks is the same woman who donned jumpsuits for an entire season?

America's Next Top Model: Oh make them over
https://haligonia.ca/americas-next-top-model-oh-make-them-over-25944/