ANTM is back, and they’ve made some improvements. Tyra and Co. are sticking with the high-fashion feel of last season, and she’s even gone so far as to – gasp! – cut casting from the aired episodes! This, I think, was a good job. Tyra was right on the nose when she mocked the casting episodes in her wackadoodle opening segment. Say what you want about Ms. Banks, but the woman does know how to laugh at herself. Also? I’m really digging her hairstyle this season. And really, that’s what’s most important.

To summarize the opening moments: A bunch of girls were told they’d been cut, but then it turned out they were actually the fourteen finalists. Then Tyra showed up in a monstrous blue leopard print jacket and bow and it was revealed they were actually already in the downtown L.A. apartment they’d be sharing. Large amounts of squealing ensued. 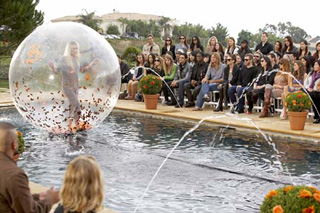 The girls jumped right into the competition with a runway competition. Not just any runway, though. A tiny platform over a pool of water. And they’d be moving inside large plastic bubbles. Because, you know, every time I see an outfit I might like I think to myself “I wonder what that would look like behind a sheet of plastic?”

One girl (I don’t know who, since I never learn names until at least the makeover episode) said “What if they can’t get it open and I’m stuck in a bubble for the rest of my life? Like, that went through my head a million times,” and officially won the title of Stupidest Wannabe Model Ever, or Girl Who’s Never Heard of Scissors.

Really, the whole think was designed just so the girls would look as foolish as humanly possible should they take a tumble. You thought falling into a swimming pool in an expensive designer outfit in front of a crowd of judgmental people was embarrassing? Ha! Try being stuck in a bubble and just bobbing in there, trying desperately to make your way out of the pool without looking like a hamster stuck on his wheel. It was like America’s Next Top Model meets Wipeout.

The real challenge, though, was the photos being taken of the girls backstage. That’s what they’d be judged on, by both the panel and us.

Time for judging panel! When the girls got the Tyra Mail they all appeared to be doing some sort of American Apparel runway show. What was up with that?

For the first shoot, the photos weren’t bad. My early favorite is Hannah, because she reminds me of Analeigh and most certainly will not win. OK, let’s talk photos: 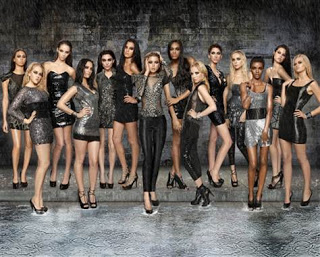 Alexandria: The judges were right, girl has serious bone structure. Looks like she’ll be ruffling feathers in the house for a while.
Dalya: This girl has potential – her photo was pretty, but not very memorable.
Nicole: I wrote down “boring, hate it”, and now I remember nothing about it.
Sara: If there was ever a girl in need of a makeover…I’m all for quirky, but I’m not sure even a haircut could make me buy her as a model.
Ondrei: Here I wrote down “weird”, proving that I really should take better notes when they show the photos.
Angelia: All I needed was one word for Angelia, though: “MySpace”.
Hannah: Seriously, isn’t Hannah a cutie? I always root for the girls who are too adorable to win.
Kasia: Kasia is this season’s plus-size or “fiercely real” (because the other girls are, like, totally fake) model, but her photo was fiercely bland.
Monique: I liked Monique’s photo, and I think she has potential.
Mikaela: Ready for a backhanded compliment? Mikaela looked totally snotty in her photo, and I dug it.
Dominique: I wrote “blah” for her photo, and that was truly the best way to describe it.
Jaclyn: This girl really couldn’t be any cuter or sweeter, so I can’t wait to see what they do to her in the makeovers. Will they amp up the cute factor or counter it with an edgy look?
Molly: The straight-up-the-nose shots are never my favorites, but the girl worked it.
Britanni: I loved Britanni’s shot, which surprised me since I find her looks rather average.

Also, best quote of the night? Andre Leon Talley telling poor Britanni (I really hate how she spells her name…and that I can’t write about this show without constantly checking names on the show’s website) to retire her peacock feather hairpiece forever. This coming from a man with a feather duster stuck in the back of his fedora.

First called was Molly, then everyone else until Dominique and Angelia were left. But Dominique had shown personality when she almost drowned in her bubble, so Angelia was sent packing. But at least she has an awesome moody photo for her MySpace page, right?

What did you think of the episode? Have any early favorites? Are you as stressed out as I am about the fact that Survivor, America’s Next Top Model and American Idol are all on at the same time? (Just me? Well, in case you were wondering, it looks like recordings of Idol have been relegated to weekend viewing. I’ll try to do a blog post soon.)

America's Next Top Model: On the Bubble
https://haligonia.ca/americas-next-top-model-on-the-bubble-33649/