Anthropomorphic… don’t you just love that word? There are some words that you just like no matter what the meaning (one of my other favourites is serendipity, but I digress). For this blog post anthropomorphic is the perfect word as it means suggesting human characteristics for animals. If you are the typical reader, you have been presented with these type of novels from a very young age. Examples of this are characters such as Winnie the Pooh, Charlotte, Uncle Remus’ animals such as Br’er Rabbit, etc. For this post, I am going to write about adult anthropomorphic fiction.

One of the many reading perks of this job is that we sometimes get advanced reading copies of books. I was lucky enough to get an advance copy of Albert of Adelaide (M) by Howard Anderson, which has the release date of July 10th. Anderson’s debut novel reads like a western and features an animal that I don’t think about that often (if at all), a platypus. Albert is on a journey of discovery when he escapes from the zoo in order to look for the “old Australia”. Along the way he meets prejudice because he is not a marsupial. A pyromaniac wombat named Jack, a couple of gay bandicoots, and a wrestling Tasmanian devil are amongst various other motley characters. The best part of the novel is the friendship between Jack and Albert. They have you cheering for them as they go along their wild misadventures.

I want to mention the graphic novel Maus (M) by Art Spiegelman in this post. Difficult to classify, it has been sometimes labelled as a memoir, a novel, history, or a mix of genres. It is based on the author’s series of interviews with his father and his experiences as a Polish Jew and Holocaust survivor. Spiegelman depicts different races of humans as different kinds of animals: the Jews are mice, the Germans are cats and the Poles are pigs. The illustrations are a wonderful addition to the words. Maus is the first comic book to win a Pulitzer Prize and has even been used in classrooms in Germany. 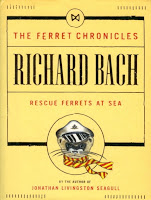 One of the first animal adult novels I experienced was Jonathan Livingston Seagull (M) by Richard Bach, which was written about in a previous post. Bach has also written a series of novellas entitled The Ferret Chronicles (M). Each novel has a different theme, having the ferrets working at various careers such as cargo pilots, in the Coast Guard, writers, ranchers and detectives. Rescue Ferrets at Sea won the 2003 Ursa Major Award for Best Anthropomorphic Novel. I love the names of some of the ferrets which suit the careers perfectly. Stormy and Strobe are pilots, Monty and Cheyenne are ranchers and Shamrock is the detective. These books can be enjoyed by readers of all ages, whether they are 8 or 80!

Watership Down (M) is a classic heroic novel written by Richard Adams about a small group of rabbits. First published in 1972, it was originally rejected by thirteen publishers. Once published it has has never been out of print and it is Penguin Books’ best selling novel of all time. It has also won the Carnegie Medal in 1972, the Guardian Children’s Fiction Prize in 1973, and the California Young Reader Medal in 1977. The Big Read, a 2003 survey of the British public, voted it the 42nd greatest book of all time. Like Bach’s book, it is a tale that can be enjoyed by all ages. Although I originally read it as a teen, I believe that in order to “get” everything from it, it is a better read when you are older. The rabbits in the novel live in their natural environment but they speak their own language, have their own culture, poetry and mythology. When their warren is threatened, a group of them go on an epic journey to find a new home encountering perils and temptations along the way.

One of the most famous examples of an anthropomorphic novel is Animal Farm (M) by George Orwell. Time Magazine chose the book as one the 100 best English language novels, it has placed 31st on the Modern Library List of Best 20th Century novels and it won a Retrospective Hugo Award in 1996. Like Maus, this novel is an allegorical tale reflecting events leading up to and during World War II, except Orwell focuses on Stalin’s Russia. The plot of the book is easy to grasp. A group of farm animals take over a farm from the drunken farmer, because they believe there is too much injustice and that they would do a better job. Once Mr. Jones is evicted, the land is called Animal Farm. The animals establish seven rules that they all are supposed to obey. All the animals pull together and the farm is a success for a time; that is until the pigs decide that “all animals are created equal, but some animals are more equal than others”. This novel is definitely one of the best political satires ever.
So these are just a few examples of anthropomorphic fiction. One question that came to my mind while writing this blog was, I wonder what sort of animal I would be?. How about you?