Welcome back, guys! I just finished watching the second episode of ANTM All-Stars, and I gotta say, it kind of disappointed. I mean, these girls have all been on ANTM before – shouldn’t they know how to pose better? Anyway, let’s get to it.

Tyra arrived at the mansion, and all the girls were playing dress-up. Huh. I feel like that could have used some more explanation. Anyway, Tyra was setting them up with a brand manager so that they could all reduce their identities to one cliche word – like “adorkable“! Because, you know, you wouldn’t want to confuse your fans with a layered, complex personality. 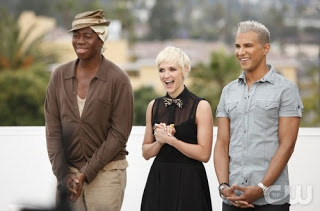 Next, it was time for the girls’ makeovers – sorry, Tyra-overs. And who better to oversee it than Ashlee Simpson? After all, she changes up her image all the time – hair, wardrobe, nose…

Now, these girls have all been on the show before so I did not anticipate any meltdowns. And of course, I was wrong. When Bre was told her short-ish hair would be cropped even more, she freaked out. As in, in the bathroom sobbing and asking to go home. It was embarrassing.

Overall, the makeovers were nothing to write home about. I mean, these girls have all been on the show before and most of them have been booking some jobs as models. So there’s not a lot to fix. Alexandria got a cool new short haircut, and most of the girls ended up looking nice.

Next, the girls had to do a photo shoot for Pink’s Hotdogs that embodied the words they’d been assigned. Because it’s so easy to make a frankfurter say “free”, “unique” or “persistent”, right?

I have to say, I was pretty disappointed in the photos. There were a few good ones – in particular, I liked Allison, Laura and Bianca (even though I was SO not into her crazy outburst in the house – she was given the word “candid”, not “bitch”). 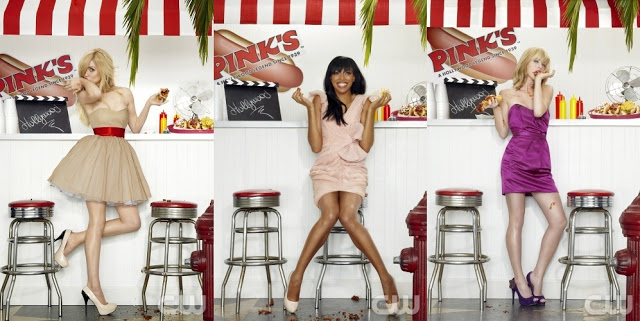 Other girls were just so blah, though. I mean, look at Sheena and Camille – could their poses get any more catalog? 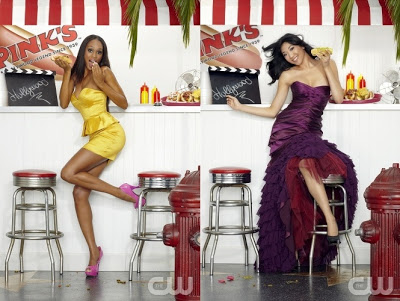 My least favorite photos came from Kayla and Isis, though. Kayla’s poses just weren’t charming or flattering, and Isis…well, it just didn’t do it for me. I used to like Isis, but was she always this skinny? 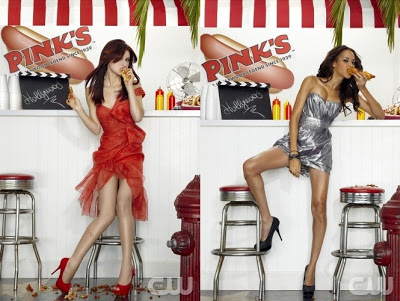 At the judging panel, Tyra demonstrated the importance of consistent branding by shaving Nigel’s head. Apparently if he’s not bald he could confuse his fans. Just so I have this straight – they brought in Ashlee Simpson because she constantly changes her look, but Nigel isn’t allowed to have hair for fear people forget who he is? 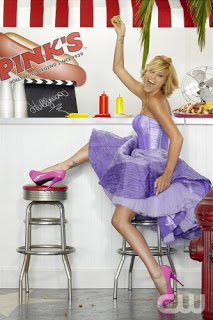 Tyra selected Lisa as the best photo, and while I didn’t love that shot (I mean, there was food in her mouth) she was the girl who best embodied her ridiculous word. (Hers was “daring”, because she peed in a diaper once.) Is it just me though, or does Lisa look really old to y’all? I mean, she’s not the only one – a few of these girls are past their prime modeling years (hey, don’t hate the blogger hate the industry) but with Lisa, it’s different. Like perhaps it’s not her age, so much as the amount of time spent in a tanning bed. Anyway, her look is not my favorite. 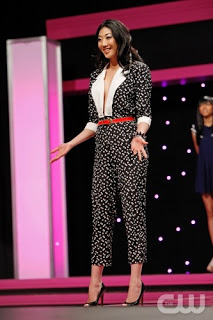 Next, Tyra called Bianca, Alexandria, Laura, Angelea, Dominique, Shannon, Allison, Isis, Bre and Camille. That left Sheena and Kayla in the bottom two, and they were both so bland this week that I didn’t really care who went home. Tyra decided to keep Kayla around (I guess the lesbian trend isn’t so seven years ago after all, Mr. brand man) and Sheena was sent packing. I was surprised – I thought women who like jumpsuits would stick together.

Did you watch the episode? What do you think of this all-stars cycle so far?