Nova Scotia has the highest rate of Fabry Disease in Canada, affecting​ one in 15,000.​

Fabry disease is a rare genetic mutation in the body that may result in progressive, irreversible and potentially life-threatening disease of the kidney, heart, and brain. Symptoms vary from person to person, making it difficult to properly diagnose the disease.​ As a result, many people live with Fabry disease for years without knowing it. 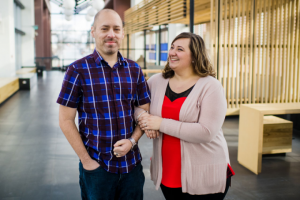 Ryan Deveau has lived with this rare disease for his entire life. From early childhood, he suffered from chronic pain in his hands and feet and an inability to sweat that left him prone to overheating quickly, especially in the summer or during physical activity.

Ryan later learned he had a genetic condition known as Fabry disease. If left untreated, Fabry disease can lead to organ damage and a shortened life expectancy. In his late 20s, Ryan began to notice the effects of the disease – his heart was enlarged and his kidneys weren’t functioning properly. ​

Ryan opted to begin bi-weekly infusions of enzymes – known as enzyme replacement therapy. The treatment helps him manage his disease to avoid discomfort and pain and get back to enjoying time with his family.

April is Fabry Disease Awareness month, and in recognition of that, Ryan is available to share his story of living with a rare disease that impacts many people living in Nova Scotia. Ryan hopes to help other patients by encouraging them to talk to​ their family doctors to discuss diagnosis and how to best manage their symptoms early on.