I have often wondered about how co-authors work together. Writing seems such a solitary thing to do. James Patterson seems to co-author books every week with someone or another. Douglas Preston and Lincoln Child are successful writers in their own right, but are also New York Times best-selling authors together. I am going to focus this post on a few other co-authors that I have discovered in this blog.

The most recent co-authored book I have read is Heads You Lose (M) by Lisa Lutz and David Hayward. Truthfully I did not “get” the title until the end of the novel; maybe you will be quicker and I will not ruin it for you. Lisa Lutz is know for the Spellman book series which are a humourous look at an unusual family of private detectives. For this novel she teams with an ex-boyfriend to write a very strange murder mystery. Paul and Lacey Hansen are 20 something pot growing siblings with very little “get up and go”. They discover a headless body in their front yard one night and because of their own illegal operations decide to get rid of the body. But like the cat, it came back the very next day!
What makes this novel unique is that each author writes alternative chapters and each can’t undo the others work. Between chapters the reader gets to read the correspondence between the authors, which are very funny critiques and bickering about the other’s work. As a fan of mysteries it was difficult to figure out “whodunit”because the authors themselves don’t really have any clue. So if you are looking for a great classical mystery this book is not for you. But if you are looking for a quirky funny book with laugh out loud moments, I would recommend giving the team of Lutz and Hayward a try. 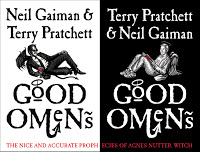 I love, love, love Good Omens, the Nice and Accurate Prophecies of Agnes Nutter, Witch (M) by two of fantasy literature’s “wizards of words”, Neil Gaiman and Terry Pratchett. Because there are so many books and so little time I rarely read novels more than once. I have lost count how many times I have read this wickedly funny book.
According to Agnes Nutter the world will end on Saturday, next Saturday to be precise. So the Armies of Good and Evil are gathering for an epic battle, frogs are falling out of the skies, tempers are rising, everything going according to divine plan. Except for Aziraphale, a somewhat fussy angel and Anthony J Crowley, a demon who is described as “an angel who did not so much as fall as saunter vaguely downwards”. Together they team up to stop the coming Rapture. In order to do this they have to find and kill the Antichrist, who is an eleven year old boy. The problem is neither of them know where to find him. The Satanic nuns (the Chattering Order of Saint Beryl) ended up giving Adam to the wrong family. The Hellspawn, instead of living with a powerful diplomat, grows up in rural Tadfield with his “hellhound” a scruffy mongrel. Combine all this with the bikers of the Apocalypse (including Grievous Bodily Harm and Embarrassing Personal Problems), maggots, untimely death, and a blazing Bentley (that only plays Queen) makes an hugely funny mix that you may want to read again and again.
While writing this blog I came across names that I had originally thought was one person; only to discover that this pen name is a pseudonym of a team of writers. I found this very interesting and perhaps you will too.

Tori Carrington (M) is the pen name of husband wife team Lori and Tony Karayianna
Quinn Fawcett (M) is really the team of writers Chelsea Quinn Yarbo and Bill Fawcett
Nicci French (M) is another husband and wife team
I have only touched upon a few of the number of titles out there that are the result of co-authorship. So I don’t know if two (or three or four….) heads are better than one when it comes to writing fiction. I suppose it really depends on how all parts works together and if writers are willing to take one for the team! Perhaps you might get inspired to join forces with some one to write your own best-seller!

Are Two Heads Better Than One?
https://haligonia.ca/are-two-heads-better-than-one-59528/