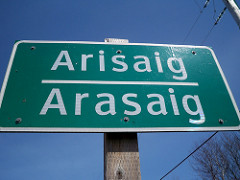 On a warm spring day, my sister and I took a mini road trip to the “Mini Cabot Trail”. Wouldn’t it be cool if we were driving a mini?

The windy road comes to Arisaig (Àrasaig in Gaelic), a small village in along the Sunrise Trail on Route 245. This community was founded ca. 1785 by Scottish immigrants who named it after their former home, Arisaig, on the west coast of Scotland. This was the site of the earliest settlement made in Antigonish County by Highland Scots. Today, those roots are recognized in the highways signs that name each community both in Gaelic and English. 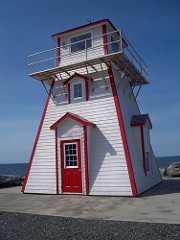 In Arisaig, signs direct you to a lighthouse at the end of a point. At the lighthouse, interpretive signs circle its base that tell stories of the area. Like the 17th century story of “Frenchman’s Barn” – when the crew of a French sailing ship thought a massive rock not far from shore was a building and ran aground.

This area is well-known in the province for its fossils. Interesting, eh? Arisaig rocks and fossils were deposited in a warm, shallow sea more than 200 million years – before dinosaurs (and this laptop) evolved! Many of the animals at Arisaig either lived attached to the sea floor or buried in the mud and silt below. There was not much life on land at that time, not even plants. Gosh, that would mean no chocolate either but who can live without chocolate anyway. Good thing I wasn’t around. Just sayin’. 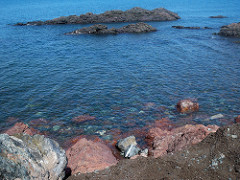 The 4 kilometres of coastline from McArras Brook to Arisaig Point, including Arisaig Provincial Park, exposes 47 million years of earth history. This is not much in geological time – the Earth itself is older than 4.5 billion years. (Sorry Earth, I know it’s a sensitive topic with you to talk about how old you are. Bad secret I guess.)

If you’re Arisaig on a clear night, look across the water and you’ll see the lights of PEI (30km across the Northumberland Straight). From that distance, they’d be “mini lights”…sorry, can’t help myself.

Check out these links: