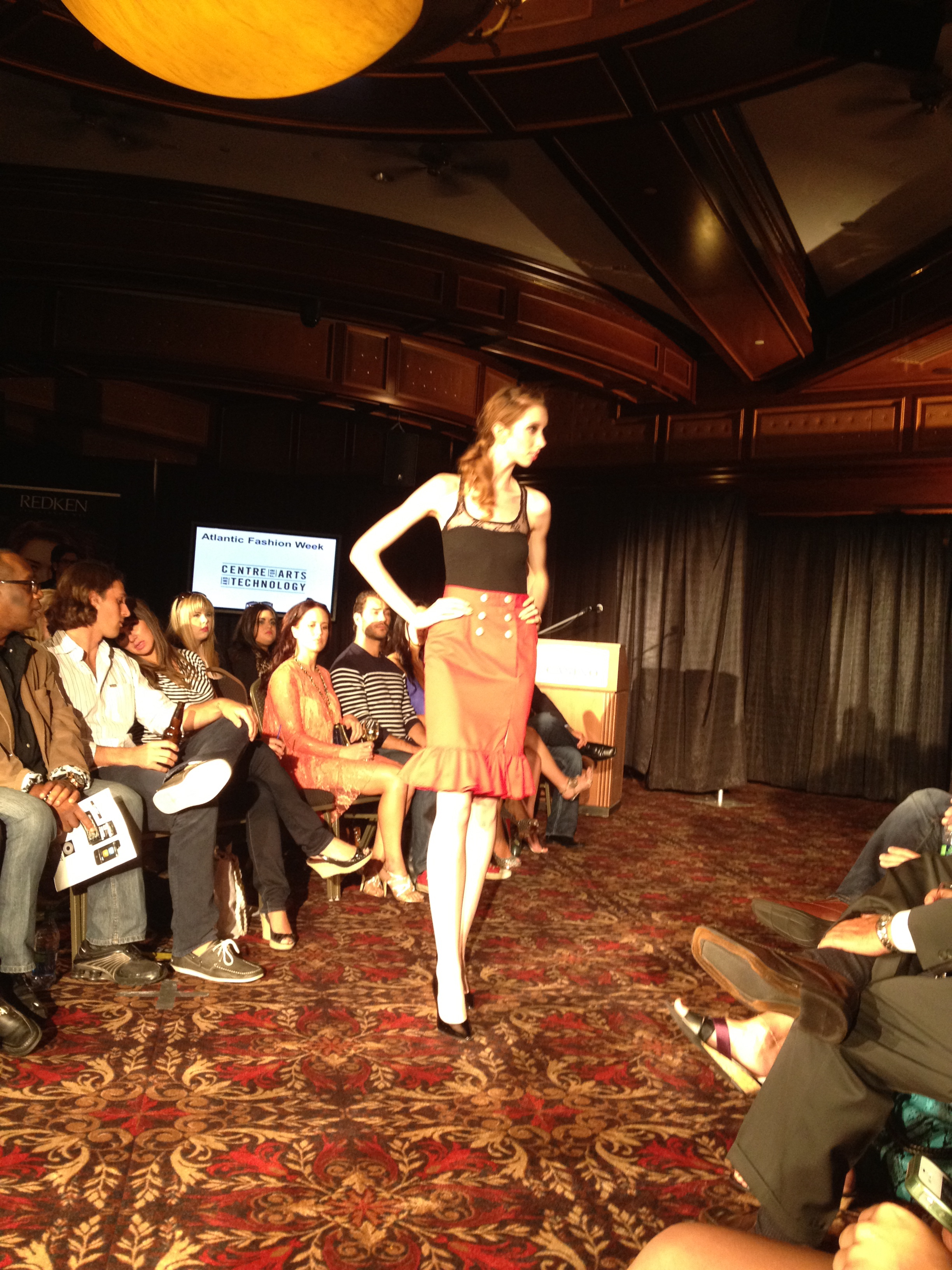 This past week we were invited to attend Atlantic Fashion Week. We were very excited to join the Halifax fashion community and watch local designers, both up-and-coming and well-established, show their latest collections.

We saw some great things (and some crazy things) over the two evenings of showcases and we have lots to write about, but instead of reviewing each collection and designer, we thought we’d give you our top 10 moments.

In general, I think we’re in agreement that the Emerging Designers Showcase knocked it out of the park. Everyone was great, but we had some favorites:

– The Collection Project by the First Year students at the Centre for Arts and Technology  was very, very good. It was well put together and looked like stuff that you might conceivably wear out of your house in Halifax without eliciting too many WTFs.

Once you get past the fuzziness of the photo itself, the look is actually pretty cute.

–  BEC fashions brought out the cute summery looks with a little bit of edge to them. I could not believe this girl is still a student. The lines on the clothes were fantastic and obviously took some mad skill to produce.

– Eman Mustafa – This girl seems really cool, and some of the pieces she showed were just fabulous. With a consistent pleated theme, the clothes were unique, colorful, fun, and young – all those good things that fashion should be.

– Getting to see some fabulous local fashion bloggers – Fashion bloggers are arguably the trendiest people on the planet, and we were definitely seated amongst some Halifax fashion royalty with L-A from FPQT, Mo Handahu from Clutch Culture and Curvy Geekery, Short Presents, Love, Lust & What I Wore, and some of the team from Fashion East Halifax all in the mix (just to mention a few).

I headed to the Emerging Designers Showcase straight from a work conference. I was suited up in my “desk-job” attire and didn’t have time to change. Needless to say, I felt sufficiently out-glammed by every other attendee, including the bar-tending staff.

– Smashing preconceived notions – I guess I hadn’t really put much thought into what the designer behind the Overman line of body jewellery would look like, but when PEI-based Matt Bowness poked his head out from behind the curtain after his wares went down the runway, I will admit I was surprised – and very impressed with all the intricate and interesting pieces in his collection.

One of the many cool looks from Overman

For the Designer Showcase, these were the high-notes for us:

– The collection by Dreamboat Lucy was pretty, pretty good. Ok fine – it was awesome. Dreamboat Lucy won the Mercedes-Benz Atlantic Startup and there is no question why. So many of the looks were totally wearable (minus the brown bodysuit – but hey if you can pull that off picking up your groceries, then be our guest!!) and the designers are an adorable sister duo. Seriously kick-ass stuff.

– Sebastian Bladgon’s absolute mind-f#%k of a collection. It really was wearable art. These are not the garments you’re wearing to pick up your child from soccer practice (if you did – you’d scare the ever-loving crap of every child in a 10-mile radius), but it’s certainly awe-inspiring work and very impressive that Sebastian can envision and execute such a gloriously bizarre show, and also model his own work.

Dark whimsy at its finest

– The Models. While I hate to say we are still living in an age where seeing every bone in a model’s body is still somehow considered attractive, there was a great mix of girls who actually looked like they might indulge in a cheeseburger from time to time. And guess what – the clothes still looked super hot on them too! We love food. We love models who love food.

– Lastly, Atlantic Canada had some sneaky fashion skills tucked up their puffy sleeves! It used to be that us poor East Coasters got the tail end of trends that would spill out of Toronto and Montreal, but not any more. The amount of talent shown at these two events was beyond impressive and based on the attention these designers are getting world-wide, it’s obvious that there is some trend setting going on!

Huge thanks to the organizers of Atlantic Fashion Week for inviting us to take in this great event!

Basically all of our images from the Designer show-case night turned out blurry (this is what happens when your only camera is actually a phone), but check out Denis Duquette’s album for some great photos of the night.