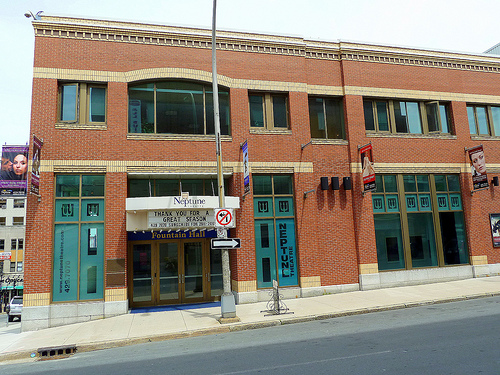 (Halifax, NS) – Neptune Theatre and the Atlantic Film Festival are pleased to launch alfreSnow filmFesto, a new partnership that celebrates the performing and visual arts and is a winter counterpart to the wildly popular summer film series, alFresco filmFesto.
The first alfreSnow filmFesto series will tribute the renowned, Alfred Hitchcock.  Each Monday evening in March, a Hitchcock production will be screened for the public in The 7 O’clock Hitchcock.  Screenings begin at 7 p.m. and will take place inside Neptune’s 200-seat Studio Theatre on Argyle Street.  A local director will introduce each film and a suggested donation of $8 will help both organizations offset technical costs and fees for rights.
The line up is of follows:
March 5 – Dial M for Murder presented by Michael Melski
March 12 – Rope presented by Thom Fitzgerald
March 19 – I Confess presented by Eva Madden-Hagen
March 26 – Strangers on a Train presented by Josh MacDonald
“From stage to screen and back again, the 7 o'clock Hitchcock is a fantastic first foray for Neptune Theatre and the Atlantic Film Festival," said Festival Director, Lia Rinaldo. "We have wanted to work together for some time, and in the spirit of true community collaboration, we also pulled in a number of directors to introduce the screenings who tend to crossover between the theatre and film realms in our city."
“Partnering with AFF to bring our city a cinematic winter treat gives us a Hitchcockian thrill,” said Jennie King, Sales and Marketing Manager at Neptune Theatre. “These gripping classic films celebrate the art of visual storytelling and having local artists participate enhances the audience experience enormously.”
Audience members are encouraged to stay after the film screenings to meet and greet with other audience members and the presenting director.
About Neptune Theatre
Now in its 49th season, Neptune Theatre inspires audiences with great stories. Located at 1593 Argyle Street, Halifax, Neptune boasts two stages: Fountain Hall and the Studio Theatre; a year-round Theatre School; and a province-wide Young Neptune Company Tour.
About the Atlantic Film Festival
The Atlantic Film Festival is a ten-day celebration of film, video and music from around the world. It is a festival that turns Halifax –a charming and historic seaside city – into an international mecca for the arts, year after year abuzz with filmmakers, industry types and film lovers.  What began in 1982 as a tiny, grassroots operation in St. John’s, Newfoundland has blossomed into one of Canada’s premiere film festivals.  The cornerstone September Festival includes year-round industry and community events for every taste.
Source: Release