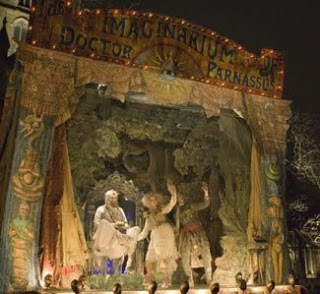 “Can you put a price on your dreams?”

The Imaginarium of Doctor Parnassus has already gone down in history as being Heath Ledger’s last film. I expect that it will have a much wider audience because of this, and I’m happy that many will get to experience this adventure.

It just might be Gilliam’s masterpiece, filled with spectacle and layers of meaning. The CGI in this movie is fantastic, and never cartoony (my issue with the upcoming Alice in Wonderland film, which tries for weird and ends up looking boring). The travelling show of Doctor Parnassus provides the backdrop for the journey out of the real world (modern day London, filled with crumbling buildings) and into the imagination.

Every thing about this film seems to have come from a children’s story book. Colour drenches the film when things are good, and when things take a turn for the worse, we find ourselves in a barren wasteland or endless snow-covered field. The archetypal characters play roles we’ve seen in many a fairy tale. The old man, powerful but not especially wise. His beautiful daughter, desired by many. A mysterious stranger with a dark past. And, of course, the bad guy… in this case, the Devil.

The story told by the film is not the strongest, but it does not diminish the wonder you feel being pulled into the world of the imagination. It reads as Doctor Faustus meets (fittingly) the Brothers Grimm. The immortal Doctor Parnassus (Christopher Plummer) has made a wager with the Devil (Tom Waits), and he has come to collect. The prize is Parnassus’ daughter, the beautiful Valentina (Lily Cole). When Parnassus is given one more chance to save his daughter, the stranger Tony (Heath Ledger) enters their lives and changes everything.

Although there are a few scenes made mighty uncomfortable by the thought of Ledger’s passing hanging over head, this is a good role for him to be remembered by. The darkness of the Joker is forgotten, and replaced by a charming but deeply flawed man who makes us laugh while trying to get away with it all.

While Ledger is the most talked-about actor in this production, Plummer is the true star, though it may not be apparent until the film is over and you realize its his story we’ve been told. He is both majestic and deeply flawed, and plays a convincing drunk.

Tom Waits, in a role he has been rehearsing for decades, I imagine, is outright perfect as Mr. Nick–the Devil. Mr. Nick is dressed to the nines, pencil mustache included, and hides in the shadows when he isn’t taunting Parnassus. He had the audience absolutely shaking with laughter, and by all means should take this character to the studio and pen Songs of Mr. Nick: The Devil Made Me Do It.

In one of her first acting roles, Lily Cole flexes her supermodel legs in lovely, flowing costumes. Her surreal features fit into the bigger-than-life scenery like she was simply plucked from Gilliam’s brain. Apparently she has been cast to play Alice in Marilyn Manson’s movie about Lewis Carroll, Phantasmagoria (Manson plays the titular character)… alas, stay away from that guy, young lady.

The three actors who reprise Ledger’s role while in the imagination do quite a good job, and Gilliam has made them fit into the story quite naturally. Johnny Depp was a little annoying as he slipped into his typical Burton-film speech, but I very much enjoyed Jude Law and Colin Ferrel who had more subtle performances.

When the film slows to a close, many may be confounded by the story. But as someone close to me said, “[Parnassus] is atmospherically mind-blowing, but plot-wise a little meandering.” You are taken for a ride somewhere, but the conclusion is fuzzy, because really, it doesn’t matter. The experience in this movie is driven mostly by the eye, and dare I say, the heart. Let your brain sit this one out… it’ll just get strained, anyways.