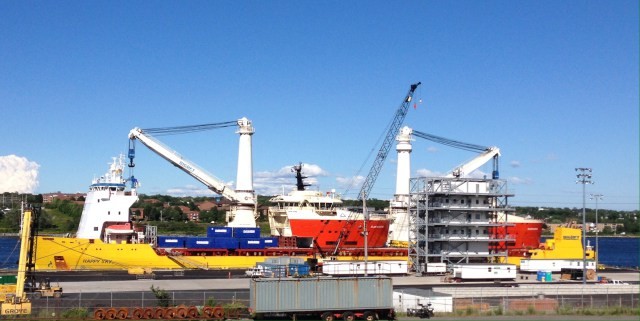 Atlantic towing recently won a renewal for offshore contracts off Newfoundland and announced they were building new PSV’s to do the work. These vessels would be built offshore.

Seems the built offshore bit is a sort of, as is thier arrival today. Rather then build complete vessels the top sides arrived today aboard the Biglift vessel Happy Sky. Presumably the bottom parts will arrive shortly on a semisubmersible vessel.  The tops can then be joined to the hulls completing the ship.

Previous Atlantic towing offshore vessels were built at halifax shipyard. Due to clearances in the old assembly hall top sides were constructed and attached to the hull in the yard, so this procedure is nothing new to Halifax shipyards. I suspect in this case importing ship parts results in less duty to be paid then the 25% paid on imported vessels.