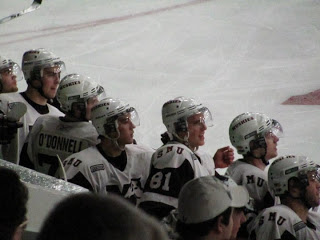 The Huskies were national champions in 2010, the third CIS title in four years for the AUS in Men’s Hockey. (photo credit: Richard Lafortune)

by Joel MacDougall
It boasts the defending National Champions, the # 1 ranked team for most of last year and and five teams that have been ranked in the Top Ten this year, and its teams have just recently finished a successful Hoiliday exhibition season. The Atlantic University Sport Conference has become the powerhouse of university hockey in the country.

The UNB Varisty Reds have been the class of CIS Hockey for the past few seasons. They were a favourite to claim the National Championship last year, and third title in four years, before they were upset by St. FX X-Men in the playoffs. This parity or ability of practically any team (sorry STU, not yet) to win on any given night is a trademark of the toughest conference in university hockey.

This season has seen the favourites take their usual spots at the top of the conference. UNB leads the way with an 11-4-0 record, while Saint Mary’s is right behind them with a 10-4-1 mark.

But the comfort zone between them and the next set of teams has all but been erased.

Despite not being able to regain the #1 spot in the country (yet), UNB has defeated the top ranked Alberta Golden Bears and the McGill Redmen, who have flip-flopped with the V-Reds for #2 all year.

Coming off the National Championship last year, Saint Mary’s has continued its strong play and has remained firmly in the middle of the Top Ten National rankings all year, moving up or down on occassion.

The UPEI Panthers have come out in the first half and posted a 9-4-2 record to sit third in the conference. Not even mentioned in the early season national rankings, UPEI has held a permanent spot in the Top Ten since November.

ST. FX was ranked fourth in the country prior to the season, but streaky play has seen them lose that spot in the Top Ten. They held on to the National ranking early on, thanks in large part to a four game winning streak to start the year. The X-Men tumbled out of the Top Ten by dropping the next six straight. That was followed by a three-game winning streak and splitting the final two games before the Holiday break.

Over the break, the X-Men defeated the #3 ranked McGill Redmen in men’s hockey to capture the fifth annual Keating Cup Challenge in Antigonish. The X-Men proved last year that they can knock off the top teams, it just seems a matter of being hot at the right time, or improving their consistency.

The Dalhousie Tigers came into the year looking to take a leap forward in their competitive level. Early on the Tigers struggled to string together succesful outings and couldn’t score enough. Dal seemed to find their stride late in November though, posting a 4-1 record in their last five games, including victories over nationally ranked UNB, Saint Mary’s and UPEI. See? Any team, any night.

The story is much the same for the Acadia Axemen, who have posted a solid 7-6-2 record so far. That may not seem overly impressive, but it has them only six points back of UNB and includes a couple big wins. The weekend before the break saw the Axemen defeat both the V-Reds and UPEI, proving once again that on any given night…yadda yadda yadda.

UNB will host this year’s National Championship tournament March 24 – 27, and that will allow for a second AUS representative. Now, I suppose the smart money is on Saint Mary’s and UPEI to battle for that spot, but it seems like it could come down to who gets hot at the right time. Just as St. FX ousted UNB last year, could it be Acadia or Dal that does the same this year?

Regardless, the second half of the AUS hockey schedule proves to be hard fought as teams position themselves for the playoffs. Currently only six points seperates sixth from first.

Joel MacDougall lives in Halifax and writes about all sports local and abroad. Follow him on twitter @jmdougall and check out his blog, www.route19.wordpress.com.